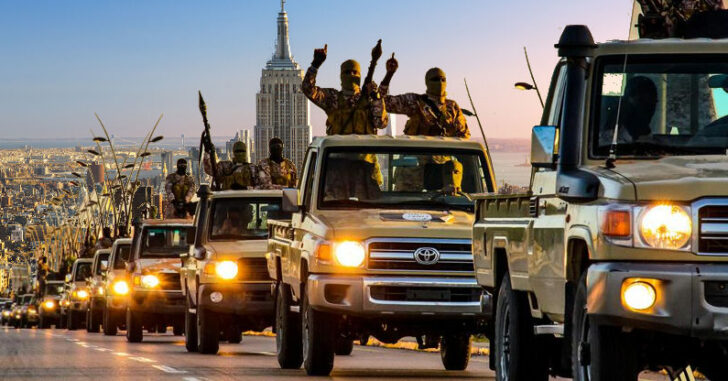 The Islamic State recently released a new video claiming they were gearing up for some attacks in the Big Apple.  No surprise — New York City has some of the most strict gun laws in the country and perhaps one of the most robust security apparatuses (NYPD) as well. This may lead to a sense of false safety for millions of inhabitants of the Five Burroughs and visitors.

In the State of New York, there are very strict requirements to become a concealed carrier.  Those measures are only more complicated the second a person steps foot in the Five Burroughs of New York City.

Heck, we covered an article where the County Prosecutor for Nassau County wanted to ban her District Attorneys from carrying guns.  It seems that many of the elites in New York City are so far removed from reality and have such blind trust in their police force that the average citizen no longer factors into the equation.

“It is the goal of terrorists to intimidate and disrupt our democratic society,” New York Mayor Bill de Blasio said during a news conference late Wednesday night. “We will not submit to their wishes.”

De Blasio emphasized “There is no credible and specific threat against New York City.”

Here’s a crazy idea — let law-abiding citizens have the ability to defend themselves.

“In New York, we understand that we are a terrorist target, it reflects the importance of this city,” Bratton said. “Understanding that, this city places great importance on the safety of New Yorkers and the almost 60 million visitors who will come to this city.”

This is reflected in the 1984-style military operations that the NYPD regularly conducts in its own backyard.

France also conducted anti-terror military drills in its own backyard of Paris back in August.  That reflects the growing reality that terrorist attacks are only becoming more common, more complex, and require substantially more force to put down.

Why, then, are the people visiting and living in NYC not allowed to defend themselves?

This is a key question that keeps getting ignored.  As many of those who carry concealed know, New York acknowledges NO out-of-state concealed carry permit.

Visiting from Tennessee?  Leave it at home.

Passing through from Massachusetts to Pennsylvania?  Better keep your only means of self-defense unloaded and locked in the trunk. This has truly not only made NYC just as perilous as Paris for visitors, but it’s also deluded the public into thinking that they’re not their own first line of defense.

Let’s hope for the best — and carry everyday.