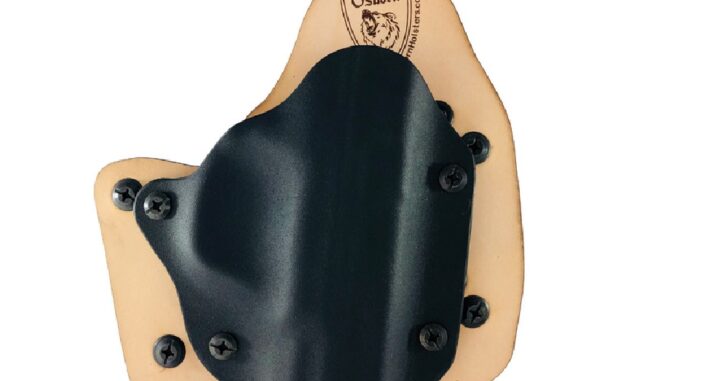 People are picky about their holsters.

Concealed carriers are picky about very nearly everything, and with good reason — if any part of their carry set up doesn’t work, they might not be able to react swiftly and safely when they need to.

In an attempt to keep our readers up-to-date with the latest and best in gear, I reached out to Osborn Holsters to see if they might have any holsters they might be interested in having tested and reviewed for you all; they were happy to oblige.

In fact, they sent out three holsters for testing — this will be the first of three reviews to come out over the next few weeks. I want to thank the folks as Osborn Holsters for being patient with me as I have marched all up and down creation trying to get their holsters to fail in some way. For those who are in a rush, allow me to sum up this holster briefly: It’s a superb piece of equipment.

When I received this holster for testing, I planned on wearing it constantly for two weeks in various positions and while participating in different activities, and I’ll tell you what, it surpassed my wildest expectations.

Now, let’s break it down:

The Osborn OWB Slim is one of the few OWB holsters that I have found to be capable of real, everyday concealability. The holster, in terms of material, is exactly what you’d come to expect of a hybrid holster — high quality leather and high quality kydex.

The leather is minimalistic, but one thing I do appreciate about how Osborn makes their holsters is their specificity — an Osborn Holster back for a GLOCK 19 is not going to the same for a 1911.

That means for hammer gun-firers — no hammer bite. Always a huge plus.

The holster is held to your belt by a pair of leather straps. The straps bring the one caveat of this holster — should you choose to purchase and wear this holster, you really need have a belt with a little bit of heft to it. I tried this holster with a variety of belts, and it did splendidly with thicker, more solid belts. The loops do better, as most do, with a belt filling their entirety.

The loops brings us to the next talking point: As the loops keep the holster soundly attached to your belt, it is every bit as important that the firearm has a solid level of retention in the holster.

Osborn Holsters has a sterling reputation for quality product, and it’s no surprise that one of the things people look for in a holster first — a definitive click when a handgun is locked into place, and just enough retention to make accidental release unlikely, but a quick draw easy.

Osborn holsters boast adjustable retention, but I didn’t, and won’t change a thing.

I have holsters that I’ve has custom-made I’ve enjoyed less.

The Osborn OWB Slim is the first OWB holster I have been able to commend for concealed carry use so far. Carrying a Tristar T-100, a Baby Eagle II clone, I was able to conceal under t-shirts the same size I would normally wear.

A T-100 is a chunky, semi-compact, double stack handgun. Sitting at 4 o’clock, the handgun disappeared to a tiny shadow, and with a jacket or a bigger shirt, it simply disappeared.

When I do my Sam Axe Hawaiian shirt fashion “statement,” I mean, poof. Thing’s gone.

There are a couple of things I attribute that to, one of which is the minimalist philosophy of the holster. The use of solid straps paired with a good belt lets you put this firearm close to your body and have it stay there.

If OWB is your preferred method of carry, you want to give this a look.

I took this holster hiking, walking, jogging, sitting, driving, and even bowling. There was never a time where I wanted to take it off — I’m serious.

For those who are wondering — I always wonder this when I read holster reviews — the longest I drove was three hours in a sitting, the longest I hiked/jogged/walked was six hours, and the longest I wore it while sitting at a compute was 5 hours.

This particular holster comes in at a base price of $59.99, and although you may have a lot of options in the $50-100 price range, I strongly urge you folks to consider this one.

It’s a rare thing to have a piece of equipment you were supposed to test really change the way you carry every day, but that’s what this one did. For the forseeable future, this is my OWB option for concealed carry, and I look forward to sharing my findings on the IWB holster very soon.

There be seen above some picture detailing scratching in the leather — that’s not the equipment’s fault, and I wanted to be clear about that. I carry a Tristar T-100, as mentioned before, and although it’s a Baby Eagle II clone, it’s not quite the same as the original thing. There’s a pin on the T-100 that juts out quite a bit — that’s where the markings come from.

If anything, I’d like to give credit to Osborn to having a holster that forgives such a protrusion into my side.

You can take a look at their website here: http://osbornholsters.com/