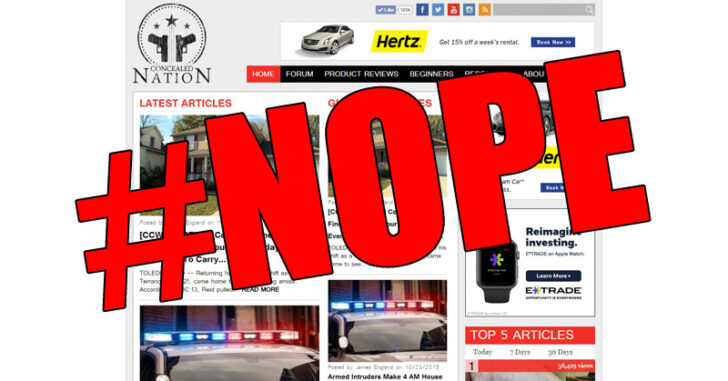 Our friends over at The Truth About Guns posted a quick article yesterday about some new happenings with their website, and certain entities that flat out ban access when a user tries to hop on the site and it made us wonder… are we in the same boat?

They received some messages from readers informing them that their various places of employment and/or service were blacklisting the TTAG website. Ouch.

Now we’re no strangers to this ourselves, but can’t help but wonder how far the reach is. We know we’re banned in many hospitals, some airports, Home Depot and various doctors offices to name a few.

Here’s the latest from TTAG on the topic:

We’ve received reports previously of TTAG being blocked in dentists’ offices and airports. We’re now hearing that the feds are blocking the world’s most popular firearms blog from their networks, too. First, it was the FAA. Now it’s the Navy. And we got this from a friend who’s a medic in the Air Force . . .

Good day TTAG. I am emailing you to inform you the Air Force has blocked you as weapons/suspicious. I congratulate you on this award. Seeing as how the AF leadership for whatever reason is very left leaning. You in my eyes have succeeded in being a thorn in the anti-constitutionalists’ side. While I am bummed I cant read up on gun news in between patients. I am proud to say you have warranted some high level of attention.

So, what about where you are? Next time you’re at work, on base, or wherever… try giving concealednation.org a visit while on their WiFi and let us know the results in the comments below.

Previous article: Parenting WIN -- Young Girl Discovers SBI Agent's Pistol In The Bathroom, Notifies Parents Immediately Next article: How To Distinguish Yourself From The Gunman During A Mass Shooting Event