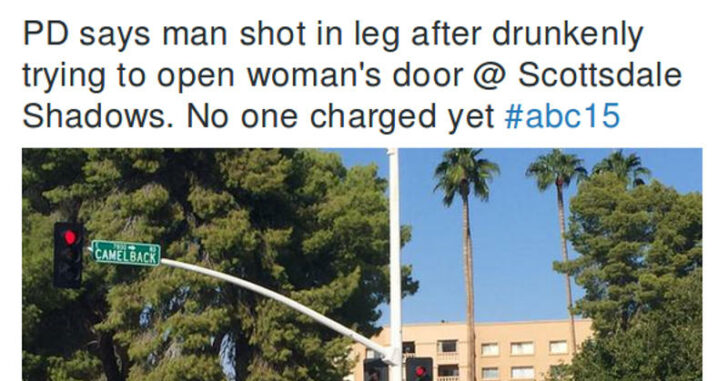 SCOTTSDALE, ARIZONA — A man who was staying with residents in an apartment complex drunkenly tried to open the door of the wrong apartment.  According to news sources at ABC 15, a woman was the resident of that apartment and thought he was trying to break in.  He continued to attempt to enter and she took out her handgun and shot through the door — hitting the man in the leg.  He was transported to a nearby hospital and treated for non-life threatening wounds and released.  No charges have been formally filed.

On the surface, this woman had all the reason in the world to suspect the worst.  Home alone, night time, apartment complex.  These are all things that drive a bolt of anxiety through nearly anyone.  However, this guy didn’t appear to fit the profile of a home invader — namely he was drunk as a skunk and confused about which apartment he was trying to enter.

Should he have maybe had enough discretion to realize he should stop when informed to do so?  Yes.

Should he have potentially faced deadly force if he continued to persist and force his way into the apartment?  That’s up to the occupant but yes.

Should the woman have shot through the doorway to hit him?  No.

And we’ve covered somewhat similar stories where the woman does the opposite — she goes outside to investigate or confront a stranger and ends up in a life-or-death struggle for survival.  We covered this.  When faced with a potential break-in, it’s always best to not go directly confront the home invader.  That said, when’s the proper time where the warning ends and deadly force begins?

In general, wait for the guy to clear the doorway first.  Why?  Because the basic tenets of firearm safety.

Specifically, don’t pull the trigger until you’re ready to fire.  Know what is in front and directly behind your target.

It’s the right thing to do.  You need to clear your target prior to engaging.  This isn’t just best practices — it’s how you stay out of hot water.

It’s also how you avoid mistakenly shooting your significant other.

That said, we covered a story where the home invaders didn’t even wait to clear the doorway before opening fire and the homeowner returned fire through the door, hitting all three attackers.  That’s one of those rare one-in-a-million scenarios that we don’t normally weigh-in on because real-life conflicts rarely obey rules.

As law-abiding, responsible concealed carriers — we try.  It’s called being the good guys.  And while this woman had every right in the world to protect herself (and we’ll never say otherwise), it would have been prudent to at least ensure she knew who or what she was shooting at first.