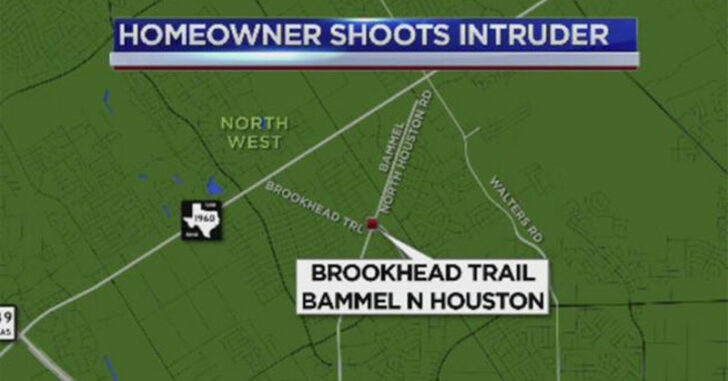 HOUSTON, TEXAS — It’s 6 am in Harris County.  It’s time to brew a cup of piping hot chicory coffee, read the newspaper, and get ready to face the day.  That’s probably what one homeowner was thinking until he heard rustling around the property.  As ABC13.com reports, the homeowner heard and saw several intruders trying to break into his home.  Apparently one of them must have been beyond just the main entrance of his home.  He retrieved his firearm and shot through the door — striking and killing one of the would-be home invaders.

As always, criminals never stop to pick up their own — the mortally wounded crook was abandoned by his two buddies to bleed out on the property.  By the time authorities arrived, the crook was dead.

The home is located in a scenic portion of the woods in the outskirts of Houston proper.  Quiet, peaceful, it’s unknown at this time why the would-be burglars were attempting to break in.  The main suspect, who was killed in the initial volley, was left unidentified by the news source and authorities are looking (but unlikely to apprehend) the two who fled.

One thing the homeowner certainly did right was not bothering to wander out onto his property or open the door to investigate.  In a home invasion scenario, it’s best to not go out and meet your foes head-on.  It’s unknown whether the criminals were armed and it’s unlikely they even suspected the homeowner was awake when they begun the burglary.