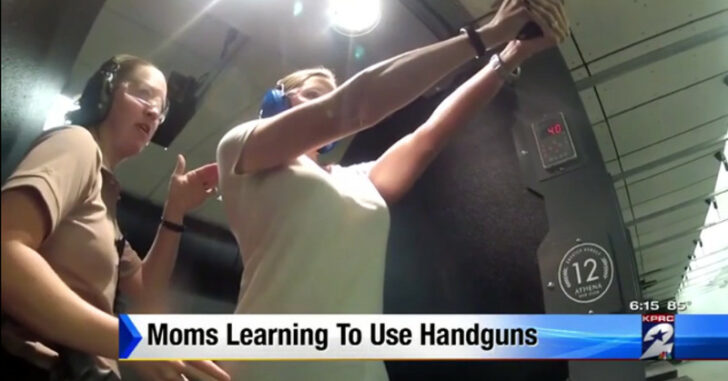 HOUSTON, TEXAS — More than half-way through 2015, there have already been 50 residential invasions in vicinity of Bellaire and West University.  A group of mothers attended a training course specifically geared to preparing them for the realities of defending their family members.

“It’s terrifying. I have two children and if anyone were to break in we would have no protection,” said Lisa Fleishman, of Bellaire.

“They’re knocking on the front door and if we don’t answer they go and kick in the back door,” said a mother named Meghan, also of Bellaire.

This prompted a group of mothers from the area to attend a special course offered through the Athena Gun Club geared to preparing them to competently handle pistols and firearms to protect themselves and their loved ones.

Many of the women reported that they had not previously handled a firearm and reported the experience to feel empowering.

It’s unfortunately a reality that many homes are being targeted for home invasion during daylight hours when children are returning home from school.  Faced with this, women are increasingly placed into positions where they may be called upon to defend themselves and their family members. It’s our opinion that this shows fantastic initiative on behalf of these mothers — whom should be applauded for refusing to stand on the sidelines while they and their children may be targeted for aggressive and violent attacks.

The NRA reports that as many as 12 to 17 million women own firearms.  It’s something noted that one of the fastest growing demographics in the concealed firearm community is indeed women.  While many refuse to acknowledge the increasingly brutal nature of criminals, a quote from Lord of the Rings does come to mind.

“…Those without swords can still die upon them.”

Thus, it makes perfect sense to be prepared, equipped, and trained.  What’s the worst that happens?  The very worst is that you actually need all of your training and equipment to defend your own life and property from criminal invasion.  And on the flipside, you live a long life where you never have need of your firearm or your training… Not a bad situation at all.

Previous article: Injection-Molded Polymer And Copper Rounds -- Take A Look At Ruger's New Line Of Self-Defense Ammunition Next article: [FIREARM REVIEW] Astra A-100: Is This Barebones Sig Sauer P229 Knock-Off Worth It?