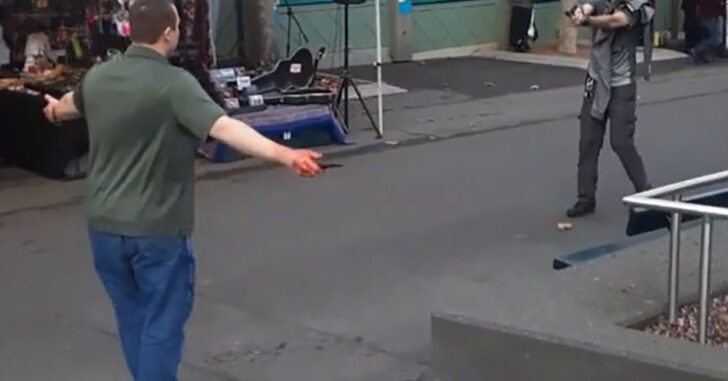 Tragedy struck the Seattle Center on Friday, November 2, as a man’s argument with his former girlfriend escalated to murder. The woman, 28-year-old Gabrielle Garcia, was with their five-year-old son at the time and had a standing no-contact order against the father. In full view of his own child as well as many witnesses, the man stabbed Garcia repeatedly, inflicting fatal injuries.

The man, identified as 29-year-old David Lee Morris, then walked out of the Seattle Center Armory (an indoor dining area) and into the street, still holding the knife and covered in blood. There, he was met by Scott Brown, who works at Skillet restaurant in Seattle Center. It was Brown’s day off, and he was dropping by to say hi to friends.

Brown did not end up having to shoot Morris (although, based on the video and witness reports, he would have had ample justification).

“Both of his hands were bloody… He was just walking toward the man with the gun,” said Eric DeAngelo, a bystander who recorded a video of the full takedown (see below). “Kept walking toward him. I don’t know what his intention was.”

Morris continued walking toward Brown, asking him to kill him, while Brown kept walking backwards, keeping Morris in his sights for several long minutes.

At last, another bystander helped subdue Morris with pepper spray until police arrived and took control. In DeAngelo’s video (around 1:45), you can see Brown looking visibly relieved as he finally puts down his gun.

According to detectives, Morris had considered killing Garcia in April or May, but decided to try to “rehabilitate their relationship” instead. According to him, the relationship was “off and on.” He accused her of “having other boyfriends,” which he “feels is inappropriate.” Morris told detectives he killed his son’s mother “to make a better life for [him].”

There’s a stark contrast with Scott Brown’ words: “Me personally, I never wanted to pull my gun out ever, not on an animal, not on a person. I carry it for protection.”

The child was not physically injured and will be raised by Garcia’s parents.

Previous article: #DIGTHERIG - Jeremy and his Sig Sauer P320c in a Custom Holster Next article: Gunman Kills 12 Inside California Bar During College Party