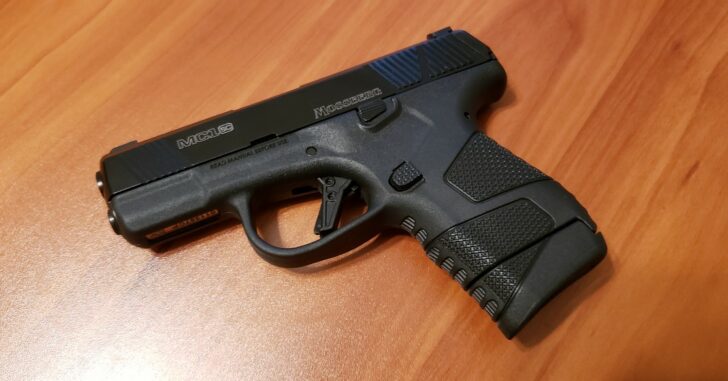 If you know the firearm manufacturer Mossberg, you probably know them for their shotguns. However, 100 years ago, they made handguns as well.

Since that time, it’s been long guns all the way. Until now.

At SHOT Show, we were fortunate enough to sit down with Linda Powell from Mossberg, and she walked us through the newest offering from the company. That’s right; their first handgun offering in a century.

Enter: The Mossberg MC1sc in 9mm

Trouble is unpredictable. It shows up without warning. It rears its ugly head when and where you least expect it. Trouble has no conscience. No regrets. No remorse. So be prepared. And be protected. Introducing the MC1sc Subcompact 9mm Pistol by Mossberg. Combining optimal shootability with superior ergonomics, the MC1sc features an optimized grip angle for easier targeting, a flat-profile trigger for an improved pull, and our exclusive Safe Takedown System™: a design that does not require the user to pull the trigger during the disassembly process. The MC1sc Subcompact 9mm Pistol. Be ready to strike back.

BUILT TO CARRY. MADE TO PROTECT.

The MC1sc was built for concealment with its slim, dehorned profile that allows for a snag-free draw. Weighing only 22 ounces fully loaded, its lightweight and durable polymer construction is perfect for everyday carry. And with its grip palm swell, the MC1sc will feel natural and comfortable in your hand. Grip panels are integrated with aggressive texturing for added control. It all adds up to the ultimate concealed carry firearm.

To get things started, here are the specifications:

I’ll be the first to admit, I was pleasantly surprised with the design of this firearm. It’s compact, feels amazing in the hand, and looks pretty nice as far as I’m concerned.

The grip features a palm swell, that makes holding the MC1sc a pretty natural feeling. What they call ‘aggressive texturing’ on the grip is a great addition, but I’d hardly call it aggressive. If you want aggressive grip, get yourself an XDs.

The texturing is enough grip, but not so much that it’ll make things painful to shoot. It’s also not throughout the entire grip, and only shows up in the truly needed places.

Everything in the above is true. It has quickly become one of my favorite triggers. The design and functionality of this trigger is very welcomed, as I was concerned upon first hearing of this firearm that the trigger would be lacking. But lacking, it is not.

The sights on the model sent to me are TRUGLO® Tritium PRO™ Sights. There’s nothing that I can say about them, except the fact that they’re bright and they work. Take a look below:

The slide features serrations on both the back and the front, something that I feel every handgun should employ as a feature (cough GLOCK cough). The serrations are comfortable, and won’t tear your hands apart like some of them out there. They’re set up as almost a triangle laying on it’s side, if that makes any sense at all.

The magazines that come with the MC1sc have an orange safety follower, so that while you’re inspecting the firearm for any rounds in the magazine, it’s very apparent if it’s loaded or not. I can see many manufacturers adding this in the future, and some already have.

Provided are two magazines; 1 with a flush base plate and another with an extension. The extension is going to be needed for the majority of people if you want a place for your pinky, but that’s unavoidable with firearms of this size. With my hands, pretty normal size, a little more than half of my pinky has nothing to grip with the flush base plate.

Below is the extended magazine, loaded.

That see-through magazine is something that caught my eye as well. I think it’s a great concept, although it’s not new. Not only does it look cool, but it gives an easy read for just how many rounds you have loaded.

The takedown of this firearm is a little different than you’re probably used to. Here are the instructions and demonstration via their website:

1. Remove the magazine and lock open and clear the action. Push the slide cover plate button* and slide it down.

2. Once the slide cover plate is removed, the orange end of the striker assembly will be visible.

3. Close the action by pulling the slide fully rearward and releasing it gently. This will allow the slide to push out the striker assembly.

4. The striker assembly is safely removed from the pistol without ever pulling the trigger. The slide is then pushed forward towards the muzzle, and removed off of the frame.

As a quick comparison in size, here’s what you’re looking at above:

The first time I shot the MC1sc was at range day just before SHOT Show. It was the one I was looking forward to shooting the most, and it was so much fun. It’s accurate, it’s extremely comfortable to shoot, and it’s a great candidate for your concealed carry firearm.

In the future, I expect Mossberg to come out with more pistols in this line, and possibly other lines as well. As they told me at SHOT Show, “We’re back in the handgun industry.”