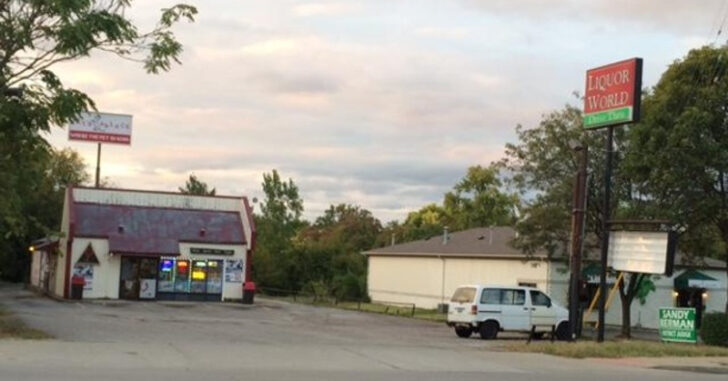 LOUISVILLE, KENTUCKY — Authorities have formally identified the body of a man whom was shot and killed by a liquor store clerk after the clerk reported he brandished a weapon.  As WLKY reported, the shooting was believed to be the direct result of a botched robbery attempt.  Kentucky State Police are not expected to press charges against the clerk whom is believed to have defended himself from an armed robber.

What more is there to say about this?  It seems on a near daily basis, we keep getting these stories of robbers attempting to hit all the “easy targets” and they keep walking into return fire.  What’s the world coming to when a good, salt-of-the-earth, mentally deranged criminal can’t knock off a liquor store for $40 and a bottle of Jim Beam anymore?!

Well, we here at Concealed Nation have had enough!

Seriously.  Stop trying to rob liquor stores.  A lot of clerks and customers are sick and tired of having to look over their shoulder to see if some armed robber wants to make a go for the cash box or their lives.  Try something else.

Yes — These are also really bad locations for an armed robbery.  Not only are there a lot of potentially armed customers who are just trying to pick up their milk and eggs for the morning, the store clerk is probably sick of your antics, too.

I know.  This may sound completely nuts but there are a lot of armed homeowners.  Not only are you hitting them on their turf, they’ll likely be better armed than you.  More importantly, they don’t have any incentive to let you leave on anything less than a stretcher.  People take the defense of their homes very seriously.  Do yourself a favor and pick a different target.

This should be self-explanatory.  Not only do they have good surveillance systems, there’s a good chance you’re not going to get away with it.

Seriously?!  What on earth do you expect to take of value at a Starbucks?  Sure, most of the chain coffee shops are supposedly “anti-gun” but you’re dealing with dozens of people — any of which could be armed — as well as making the sort of scene that draws attention to yourself.

Okay.  So you’re an aspiring armed robber and you’re asking, “well, what can I do now?”

This is going to amaze you.

You know who steals more than any armed robber ever did?  Investment bankers.  Go get into the classroom and learn how to capitalize off the markets.  Trust me, this is probably a lot more criminal and a lot more lucrative than taking some stolen gun to try to knock off a liquor store.  And who knows?  Maybe you could start the next housing bubble or something and end up owning all those houses you thought about robbing?  Worked for Goldman Sachs.

“But how am I supposed to pay for school if I’m not robbing people?”

Ding!  Take out Federally-backed student loans.  You can pay them all off once you’ve gotten your MBA and run your own hedge fund.  Trust us — you’ll thank us later.

Don’t get shot trying to rob someone’s home — teach them how to harden theirs.  As a home security consultant, you can get paid a decent amount of money to advise others on the best course of action.  You can help them install surveillance systems so they can remotely monitor their house and you can be on the right side of the law while you’re in a stranger’s home.  Really, it’s a win-win.

If you’re young and you don’t already have a laundry list of felonies behind you — you have the opportunity to join our nation’s military.  Not only can you learn discipline and attention-to-detail, you also have the opportunity to learn a trade or vocation which you can then apply to getting the quality of life you desperately want.  Best of all?  They teach you how to use guns responsibly versus leaving it to GTA 5 and Call of Duty.

You know how hard it is growing up in certain areas.  You know the types of pressure young people face when trying to make their way in this crazy world.  Use that to make a positive change in others lives before they wander down that path.

Seriously.  As much as it’s awesome to report on good guys defending themselves and their families from people who intend harm on them, it would be MUCH better if we existed in a society where people saw the benefit in avoiding those lines of work altogether.  Look, this country is only adding more and more concealed carriers to its ranks every day.  This is only going to make the job of an armed criminal that much more dangerous.  Do yourself a favor and find a new line of work while the getting is good.