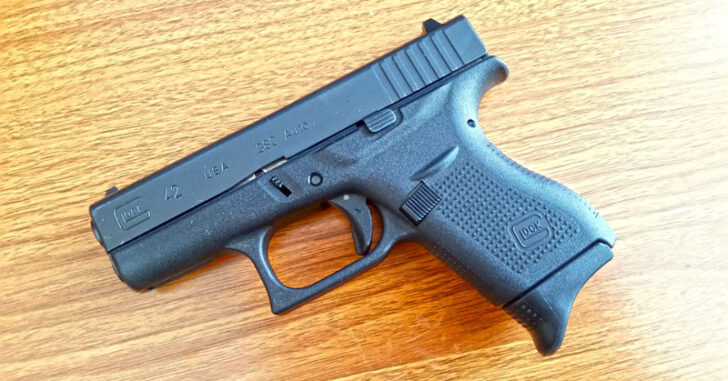 Nearly two years ago… and less than a year into Concealed Nation, I somehow convinced Glock to send me the G42 before it was officially announced. In the end, I got to showcase a great pistol and Concealed Nation was the first to publish a video and image. Not bad for business.

Immediately following the announcement, the response on the newest addition to the Glock line was mixed. Really mixed. It went from:

As you probably know, many people were hoping for a single stack 9mm. That clearly wasn’t the case. Now, we also know that the single stack 9 came out a year later.. the Glock 43.

Like it or not, many G42’s were sold (and continue to sell) and it’s become a favorite for thousands of people. Heck, I loved it as soon as I got my hands around it… But where do I stand now, almost 2 years later?

The first clue is this: The one that Glock sent to me had to be sent back to them. Bummer. Shortly after I did that, I went out and bought one. It was the new little brother to my G26 and G27, and they got along very well. Once I got a taste, I had to add it to my collection.

But what was I going to use it for? That was the big question I started to ask myself. Will it just be a range gun? Am I actually going to carry it? Is it going to sit on the castaway shelf in my safe?

The very first thing that I noticed when I picked it up for the first time was how nicely it sat in my hand. That was my biggest concern; it’s going to be too tiny to get a good grip on it. For me, that wasn’t the case. It’s a really nice-feeling pistol. But would I carry it? Would I carry a single stack .380 vs my G26 or G27? Yea, I did. And I do. For me, it’s perfect on a hot day when I’m wearing shorts and a t-shirt. It either goes IWB (below) or inside a pocket holster in my right front pocket.

Do I carry it all the time? No, absolutely not. Just like anything else, it has a time and place for usability. If I’m wearing a jacket in the dead of winter, I’ll be carrying my G23 instead. Will I also have my G42 in a pocket? Maybe. It depends on the day, really. It’s also a great range gun. Sure sometimes .380 is hard to come by (or waaaaay too expensive), but the G42 is a ton of fun to take to the range for the afternoon and sling some lead. I’ve had more than a handful of friends pick it up, shoot it, and immediately have their minds changed about what they’ve heard. They are fans of the smallest Glock to date.

Want to WIN a Glock 42? We’re giving one away this month! CLICK HERE to enter!