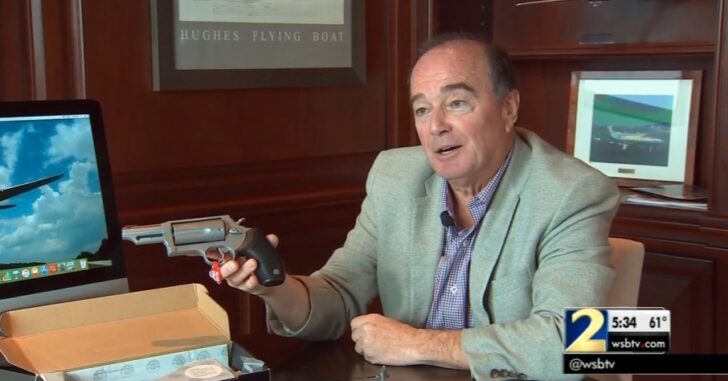 GRIFFIN, GEORGIA — Lance Toland is the owner of Lance Toland Associates, which operates numerous locations in the Atlanta area and handles aircraft insurance. After reading of recent violent crimes in the areas of his locations, he decided to make it mandatory that each employee has a concealed carry permit, and that they carry a firearm while on the job.

Once each employee receives their permit, Toland presents them with a gun: A Taurus Judge. “Everybody has one of these in their drawer or on their person. I would not want to come into one of my facilities,” Toland said. “It’s a 5 shot .410, just like a shotgun and you call it hand cannon.”

Toland said that after he made the announcement of the new policy, all of his employees had their permits within a month. It was a move made to keep his employees safe, the majority of which are women.

His company deals with insuring aircraft, and told reporters that many of his high-profile clients may soon take his lead after learning of the new policy.

“A lot of my clients are high fiving when they hear this. They think it’s the best things for a company to mandate gun ownership and be responsible,” he said.