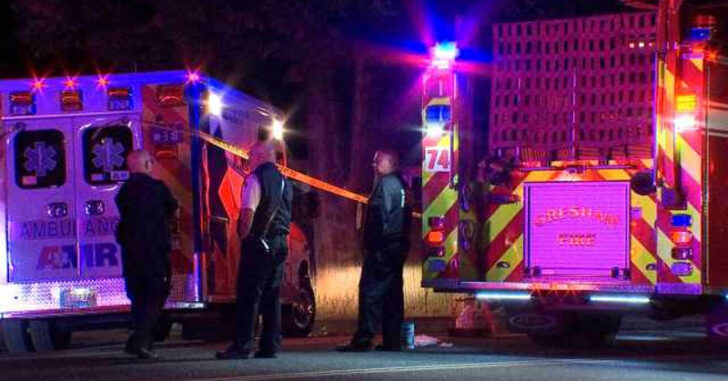 GRESHAM, OREGON — My how the tables have turned, indeed!  When four home invaders went after a Gresham mobile park resident, they were greeted by fierce resistance.  One intruder was shot and killed.  By the time police arrived, neighbors had reported multiple gunshots.  According to FOX 12, police discovered multiple wounded and one dead intruder.

As the story appears to be developing, four intruders barged in on a 34-year-old resident of the trailer park and immediately set to attacking him.  He grabbed a pistol and shot two of the suspects — killing one outright.  The man who was killed was a 25-year-old who’s prior convictions and record have not been disclosed at this time.  The other intruder whom was hit was a 16-year-old who was taken to the hospital and his condition is unknown.

Sources at FOX 12, report that the remaining two suspects have prior criminal histories and one is currently on probation already.  Both have been identified and will be criminally charged.

As for the homeowner, he sustained several non-life-threatening stab wounds and was released from the hospital after being treated for them.

Reconstructing this from square one, it appears four Hispanic males – ages ranging from 16 to 25 – were set upon ending this homeowner’s life from the get-go.  Thankfully, they didn’t go charging in with guns or this may have ended much differently.  And even more thankfully, he was able to gain access to his pistol in his home to defend himself.

This goes to show that it always pays to keep a pistol or firearm close-by no matter where you go in the house.  If these guys had been just a bit more trained and not complete, absolute idiots — they probably would have succeeded in their mission.

One thing people fail to appreciate is that in any suspected gang-related assassination attempt, all the people that go into that situation are expendable.  There may be the equivalent of a “squad leader” in their ranks — but altogether, their lives are worth trash.  Yours, however, is not.  Make sure to inflict unacceptable amounts of damage on any who would be so bold as to invade your home.  This homeowner did a more than decent job.

Close quarters plus superiority of numbers minus bringing knives to a gun fight — that’s a recipe for home invasion disaster.

Look forward to a forthcoming article on why you should always carry at home.