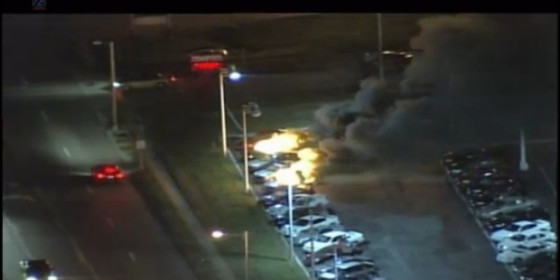 This isn’t a race issue and it never was. The media is what made the shooting of Michael Brown a race issue. The very first headlines pointed out that a white officer shot a black teenager. Take a look at this screen grab from CNN. Is it necessary to headline the race of both parties involved? Maybe CNN is racist. It’s my only conclusion. All they do is fuel the fire.

Then, we move on to the people who feel the need to burn Ferguson to the ground; literally. Men with gas cans walking around the city and torching buildings. Looters taking anything they can get their hands on. Is this how a protest works?

I don’t care if you’re black, white, yellow or purple. This type of behavior is nothing but destructive and unwarranted. And whatever cause you’re “fighting for”, you’ve set it back another 10 years.

Watching live feeds from Ferguson for the past few hours shows me nothing but a large group of opportunistic thugs who are looking to take advantage of “free reign” while they can get away with these crimes. It’s one of the most disgusting things that could come out of this entire incident, and is disrespectful to the person you’re supposedly fighting for.

I hope they’re proud that they’ve ruined a community for every single member that lives there. It doesn’t matter that their neighbors own those cars. But let’s not forget that the “protesters” are mad at police and the justice system but hey, let’s burn our neighbor’s cars.

Here is one of an estimated 20 buildings that is burning to the ground. I was even watching a feed that showed the “protesters” are only there for themselves. During the live streaming broadcast, the man’s phone (that he was using to broadcast) was stolen right out of his hands. I watched the thief run away while the live recording continued. Then, it ended for the night (for good). One protester robs another and doesn’t think twice about it. Tell me, what’s wrong with the way things are happening?

But really, congratulations. Tomorrow, you get to wake up to see the city that you destroyed, and the worst part is that you won’t even care. You destroyed hope for families, and you destroyed futures for children.

You are the problem, and you are so incredibly far from the solution.

HOW ABOUT THIS FOR AN APPROACH: ALL OF THE EVIDENCE THAT THE GRAND JURY USED TO COME TO THEIR DECISION NOT TO INDICT OFFICER WILSON IS NOW AVAILABLE TO THE PUBLIC. INSTEAD OF DESTROYING AN ENTIRE CITY, WHY COULDN’T YOU HAVE TAKEN AT LEAST A FEW DAYS TO GO OVER THE EVIDENCE AND MAKE A DECISION FOR YOURSELF, BASED ON THAT EVIDENCE. THEN, IF YOU STILL FELT THAT JUSTICE WAS NOT SERVED, YOU COULD DO SOMETHING PRODUCTIVE TO HELP FURTHER YOUR BELIEFS AND ALLOW YOURSELF TO BE HEARD IN A POSITIVE LIGHT.

THIS IS WHAT WE CALL BEING CIVIL, AND YOU’RE DOING IT WRONG.

Previous article: Woman Accidentally Kills Herself With Gun Purchased For Defense Against Ferguson Riots Next article: Guess How Many Concealed Carry Applications DC Has Received Since They Began Accepting Them Last Month