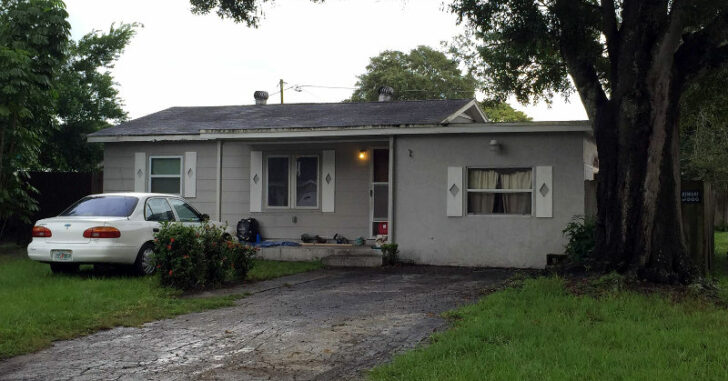 LEALMAN, FLORIDA — Pinella County deputies discovered a tragic scene where an 18-year-old was forced to shoot his own father after the father broke into the son’s mother’s house.  The Saint Petersburg Tribune reports that John Heisler, 46, whom was under a temporary restraining order by his son, Malachi Heisler, rushed the house of his ex-girlfriend, 37-year-old Jolene Andrews at approximately around midnight.  Dressed in a black ski mask, wearing all black, and brandishing an illegally obtained handgun, he broke open the window of the residence.  When Andrews and her boyfriend, Alton Pyles, 47, ran outside to investigate the crash, they found Heisler standing there pointing a firearm at them.

When the couple retreated back into the house, Heisler pursued – barring them from closing the door in time.  Also in the house was Heisler’s son, Malachi, and his 13-year-old daughter.  According to the account given to St. Petersburg Tribune, Heisler pinned Andrews to the ground.  It was at this time Andrews was able to recognize Heisler based upon a tattoo on his arm and the sound of his voice.  Pyles called out for help.

Malachi emerged from his bedroom.  Heisler pointed his firearm at his own son before Malachi shot him in the chest at relatively close range.  The assailant died at the scene.  Pinella County deputies are still awaiting the results of a final autopsy.

John Heisler had previous convictions in Pinellas County – including a recent charge in April of felonious possession of an illegal firearm.  He was out on posted bail.

The absolute tragedy of a man having to kill his own father to protect his family is a rare thing to ever behold.  Malachi Heisler, though, told reporters that if he had not done what he had done, he was certain he prevented more harm being done to his mother and other occupants of the house.

Malachi was not charged with any crime and pending results of the final autopsy, Pinella County is expected to rule this as a self-defense case.