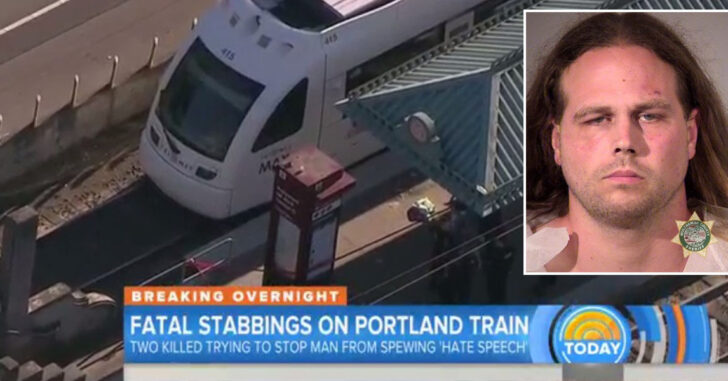 PORTLAND, OREGON — In what I wish were a CCW In Action story, a man going on a hateful rant was trying to be talked down by a few passengers. Those passengers, trying to deescalate the situation, were not successful.

And two of them lost their lives at the hands of this knife-wielding crazy person.

“In the midst of his ranting and raving, some people approached him, appeared to try to intervene with his behavior and some of the people that he was yelling at,” Portland police Sgt. Pete Simpson said. “They were attacked viciously by the suspect.”

The suspect was identified as 35-year-old Jeremy Jordan Christian of North Portland, and was captured just outside the station. He was arrested on multiple charges and ordered held without bail.

Witnesses recounted Christian sharing hate-filled speeches with everyone on the train, and telling them that this is America and he is free to do as he pleases. While he is free, the free line ends at injuring and murdering people.

Simpson said investigators are still determining whether there are any mental health issues or drugs or alcohol involved in the incident.

I can clear up the first part for investigators if they’d like to hear my non-professional opinion: Yes, this man has mental health issues. A sane person does not murder two people, slashing their throats with a knife.

As stated in the opening paragraph, I wish that I were reporting an armed citizen either holding Christian at gunpoint until police arrived, or shooting him to stop this very real and horrifying attack.