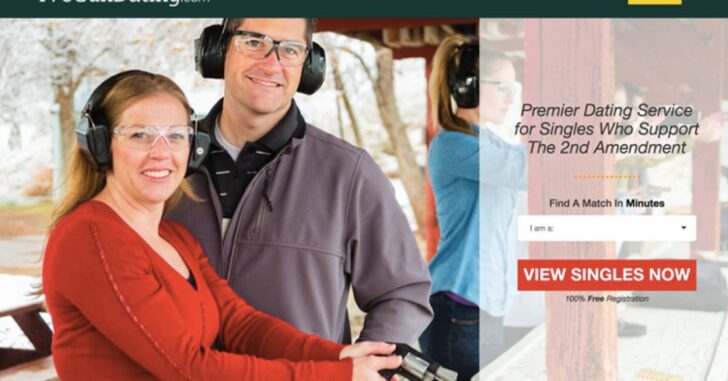 While I’ve been securely hitched for well over thirty years, I have sympathy for single people who take their gun rights seriously. Dating is enough of a minefield without throwing the volatile topic of how each party feels about gun rights and the Second Amendment into the mix.

How do you bring up with him? When do you broach the subject…on the first date? Down the road? What happens if she feels your concealed carry gun before you’ve had “the talk.”

We live in a 50/50, deeply divided country where tolerance of opposing views is pretty much a thing of the past. How can you possibly make a lasting love connection with someone who doesn’t agree with some of your most cherished and firmly-held beliefs?

One solution is to make sure you avoid wasting time with people whose values are in direct opposition to yours. Avoid a big point of conflict by making sure that you only date people who feel the same way about the right to keep and bear arms as you do. Which is the concept behind ProGunDating.com.

APRIL 11, 2018 – Finding the love of your life who also stands with the Second Amendment just got a lot easier with the launch of ProGunDating.com — a new and exciting dating site for pro-gun Americans.

The website aims to connect like-minded patriotic Americans who cherish and believe in our Constitutional right to bear arms. In the wake of a renewed push to completely dismantle Americans’ gun rights through the destruction of the Second Amendment, ProGunDating.com fills a massive void. It’s a place where gun owners can meet, talk, and not feel like they’re forced to hide their love of firearms.

Laura Clark, CEO of ProGunDating.com, told us what sparked the idea of launching a dating site for gun-lovers. “As someone who has used other popular online dating sites, I was constantly ridiculed about my profile picture, in which I was posing with my AR-15 at a local shooting range. Instead of making excuses or being forced to hide what I believe in, I decided it was time that pro-gun people had their own dating site.”

And the rest was history. Clark spent months developing the site with her team and now single gun owners from around the country are signing up by the tens of thousands — and every member is searching for love where the first date could include a trip to the shooting range.

“Pro-gun Americans are passionate about the Second Amendment, and what it means to this country. Being with someone who shares those beliefs is crucial for a relationship’s success, which is why we’ve launched a place for pro-gun, pro-NRA Americans to meet, chat and see where it takes them, ” Clark proudly stated when asked what motivated her to get this project off the ground.

When you meet someone on ProGunDating.com, Clark wants readers to know that at the very least there won’t be any time wasted on meeting an anti-gun liberal who lives in grandma’s basement and protests climate change on the weekends. The site promises pro-gun singles a real shot at finding that special someone who has the same worldview as you, which can make all the difference in success or failure of a long-term relationship.

If you’re ready to bite the bullet and take aim at finding your perfect pro-gun mate, head over to ProGunDating.com and let the hunt begin!