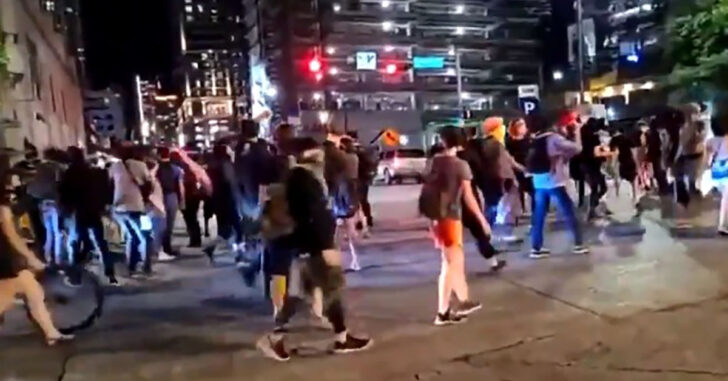 AUSTIN, TEXAS — Last night, a shooting happened in Austin during a protest with hundreds of people walking down the street, and the details of exactly what happened are a little hazy.

Clip of the shooting at the protest in Austin Texas from Hiram Gilberto on FB pic.twitter.com/VFbzqfoSff

An Austin Police spokesperson said officers were monitoring the protest when the shooting happened around 9:52 p.m. According to initial reports, APD said, the victim approached the suspect’s vehicle and may have been carrying a rifle.

The suspect inside the vehicle then shot the victim, police said. The suspect has been detained and is cooperating with officers, the APD spokesperson said.

The man shot has been identified as Garrett Foster, who gave a brief interview with a reporter earlier in the evening.

Austin, Texas: Garrett Foster, the Black Lives Matter protester fatally shot by a motorist in Austin on Saturday night July 25th, said on camera (see video interview) that the “people who hate us” are “too big of pussies to actually do anything about it” when asked why he was carrying a rifle he describes as an AK-47. The Austin Police said that Foster was carrying a rifle and may have approached the vehicle prior to the shooting. The shooter was detained and is cooperating with police.

Police held a brief press conference after the incident, explaining that a man had died after arriving to the hospital after being shot by a person inside a vehicle, who is cooperating with police.

A witness told reporters their account of what happened, which seems to leave out some important information. For example, the first 5 shots.

“As we’re walking down passing Fourth Street, a blue car just come swerving out into the middle of the street almost runs over a bunch of protesters and everybody around starts like smacking the car trying to get him to slow down,” the witness said. “He pulls down his window and he fires three shots into the guy. From point-blank. No words no nothing. And then rolls up his window and zooms off.”

How fast was the car going? Was there an argument? Were people in danger of being hit? Was the driver in danger? Who fired the first 5 shots, and then the last 3?

Many questions are left unanswered, but I imagine a press conference will be held in the upcoming days to clarify what went down.

It would seem, however, that someone acted in self-defense. We just can’t say for certain which one.

We’ll be keeping a close eye on the developments of this story.

A GoFundMe was set up for Foster, the man shot and killed, and has reached over $42,000 as of this writing.