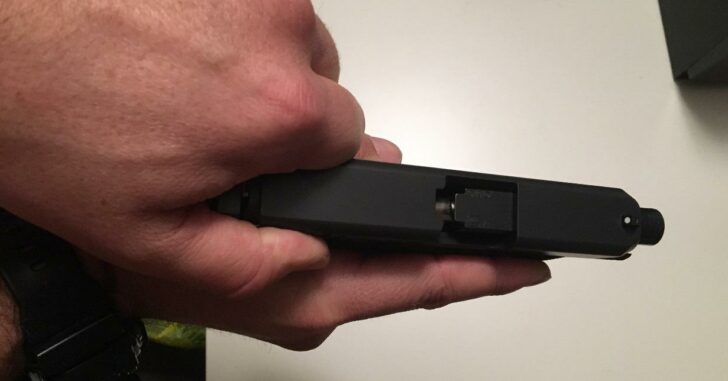 The “press check” is an administrative gun handling task that is used to verify the status of a firearm to see if the weapon is chambered. While simple enough in principle, there is considerable controversy regarding when this task should be conducted.

Doing a press check requires the handling of a loaded firearm, which is the point at which negligent discharges can happen, obviously. Therefore, many suggest not doing press checks often. The counter argument is that not consistently verifying the status of your firearm is in itself negligent. Like many controversies in the world of firearms both views have some merit but the press check is an integral part of maintaining the readiness of a defensive firearm. While we don’t want to do unnecessary handling of our loaded and ready handgun it is essential that we know the status of the weapon we are carrying for self-protection.

When to Press Check a Firearm

The idea behind the press check is to verify that a gun is chambered, meaning a round is in the chamber, as opposed to the gun being un-chambered with a loaded magazine, or perhaps completely unloaded. Many newer handguns have a “loaded chamber indicator” or a peep-hole that allows you to verify this without doing a conventional press check. This is a great feature. However, many semi-autos will still require the press check to verify status.

The press check is typically a procedure that will be periodically done with a firearm that is kept in a defensive capacity. Most firearms for sporting or hunting use are usually kept unloaded except when in the field. A defensive firearm, whether a carry piece or a home defense gun, is most often kept loaded, unless a homeowner has a preference otherwise. I believe in a loaded and chambered defensive firearm that lives either on the body of the carrier or locked in a quick-access safe, at least as it pertains to handguns. A weapon kept for defense is most useful in a life-saving capacity if it is loaded and chambered and ready to be deployed instantly.

The vast majority of gun owners don’t spend much time with their guns. Most handguns tend to be neglected, left to languish in a safe or a drawer, and given very little thought, unless the owner is disturbed by the proverbial bump in the night. Obviously such guns are not going to be press checked often, and they probably don’t warrant this, as the status of the weapon will not change as long as no other individual aside from the owner has access to the gun. For those that handle their firearms more often, whether that be for carry or training purposes (hopefully both) checking the status of the gun becomes paramount.

So, how often should we press check our guns? The answer is simply dependent on the habits of the gun owner. Many people press check every time they put it on for carry. This is a sound tactic as it ensures that your gun that you are carrying to defend life and limb is indeed ready for action. I can’t fault this habit as I think more caution is always better than too little. However, depending on your routine of gun handling, the press check may not be necessary every time you put the gun on if the gun is never out of your control.

For example, I often utilize a holster that allows me to rapidly remove the entire holstered gun from my belt via belt clips. Throughout the day I may take the gun/holster combination off of my body and place it in a quick-access safe at home, or perhaps remove it to place in a locked container in my vehicle when I need to enter a restricted area. When I put the holstered gun back on when getting back in my vehicle, or when retrieving it from the quick-access safe, I usually do not do a press check. This is because I know the status of the gun has not changed in the duration in which the gun was off my body, never even leaving the holster. Unless a safe gremlin came by and went into the safe that only I utilize and un-chambered my gun, I know the gun is still chambered when I put it back on.

Now, the times in which I urge all to press check is whenever the gun moves from an unloaded state into a loaded state, or certainly whenever you take possession of the gun from another user, or when picking the gun up for the first time in a longer duration. So, if administratively handling your gun, such as cleaning it, or if training dry or live fire, upon loading your gun back up for carry be sure to press check. While rare, when cycling the slide or letting the slide fly forward after inserting a loaded magazine it is possible for the gun to miss picking up the first round off the magazine. This can occur if a magazine is not properly seated or if a magazine becomes defective. Also, if taking possession of the gun after someone else has had access to it, obviously, verify that the gun is loaded via press check.

How to Press Check

The operation for press checking an auto-loading pistol is quite simple. With a firm grip on the gun with your dominant hand, while keeping your finger safely outside of the trigger guard and the gun pointed in a safe direction, pull the slide back only far enough to verify that you can see brass (the cartridge sitting in the chamber). You can pull the slide back by using the rear cocking serrations or front serrations if your pistol has them, or by firmly grabbing the front of the slide in a pinching grip. Be sure to keep your support hand clear of the muzzle during this entire procedure.

After press checking as described above, remove the loaded magazine and inspect it to ensure that it is loaded and functioning properly. Be sure that the next round in the magazine is sitting properly and not nose-diving and look for any other possible failures. If all is well, re-insert the loaded magazine and be sure it is properly seated. Now you know your gun is ready to rock and roll, and it can be put in the holster with confidence.

Previous article: Friends Don't Let Friends Do Meth... And Then Run Around Threatening People With A Rock Next article: Tips For Saving Money On Your Ammo