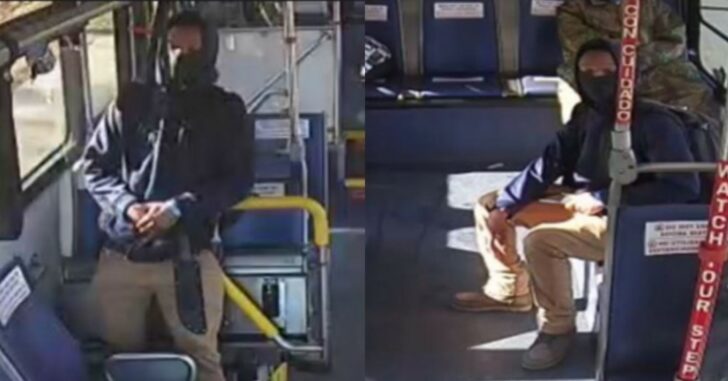 HARLOTTE, NORTH CAROLINA – A man who attacked two people on a public transportation bus Wednesday afternoon has been charged with two counts of attempted murder after stabbing them with a machete. The attack prompted the Charlotte-Mecklenburg Police Department to place the nearby Novant Health Presbyterian Medical Center on lockdown briefly as a precautionary measure, and CMPD’s K-9 and aviation units were called to assist in the search for the suspect.

Charlotte Area Transit System (CATS) bus Number 27 was on East 7th Street near Ridgeway Avenue in the Elizabeth neighborhood when the incident occurred around 3:30 p.m. CMPD initially named 22-year-old Jomorie Lamont Geddie as a person of interest, but he was later cleared of any involvement.

With the help of the community in identifying another suspect, on Friday officers located 27-year-old Reginald Jakes on East 7th Street and North Dotger Avenue, just three blocks from the scene of Wednesday’s attack. After being taken into custody and questioned, Jakes was booked into the Mecklenburg County Jail on the charges.

Amber Johnson, a nearby resident said, “It’s scary. I’m here a lot at night by myself in the evenings after dark. I just saw them put the crime scene tape out and then all the cops came up. They brought the dogs out.”

Vince Freeman, one of the victims, spoke to a local reporter on Thursday. “He got on from the front, and I was sitting in the back. He had a machete in his hand and talked about he was going to kill me, and I didn’t say nothing to him. I didn’t eve know the guy or nothing. He just came up and just stabbed me.”

Freeman’s sister, Cathy Brewster was shocked at the crime.  He took her phone call in his hospital room, “That don’t make no sense, right there, that someone came on the bus and tried to kill you. It could have gone another way. It could’ve went another round. I could’ve been planning a funeral for you.”

Brewster questioned how the suspect could get on the bus with the machete in plain view, commenting, “You could see this weapon and was standing there like this. With this dangerous weapon on the bus, how could the bus driver not see that?”

Both victims were hospitalized for non-life-threatening stab wounds and are expected to recover.

A machete is designed for cutting with a swift forceful swing. The large, curved point is typically not used as a stabbing weapon, which may have spared the victims more serious injuries or death. Even so, it can be used as a deadly weapon, as indicated by charges of attempted murder. Either of the victims, or perhaps another passenger witnessing the attacks, would have been justified in using lethal force, such as a handgun, to stop the assailant.

Previous article: New Mexico Bill Would Make You A Criminal For Teaching Your Kids To Shoot Guns Next article: Incredibly Disturbing Video Shows Feud Over Snow Shoveling In PA That Ends With 3 Dead