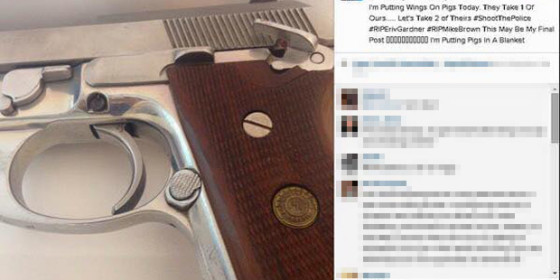 The motive of the man who executed two NYPD officers today in cold blood was revenge for the Eric Garner and Michael Brown incidents.

In the Instagram post above, confirmed to be owned by the man responsible for gunning down two NYPD officers today, shows the firearm that was apparently used in the shooting. He adds in text, “I’m Putting Wings On Pigs Today. They Take 1 Of Ours….. Let’s Take 2 of Theirs #ShootThePolice #RIP ErivGardner #RIP MikeBrown This May Be My Final Post I’m Putting Pigs In A Blanket”

It is unknown if any of his followers alerted police to the post, but if they did it was unfortunately too late.

At some point, thought to be before he murdered the officers, he posted another photo to his Instagram. The picture shows his leg with what appears to be blood on his camouflage pants. The photo has the accompanying text, “Never Had A Hot Gun On Your Waist And Blood On Your Shoe….Ni**a You Ain’t Been Through What I Been Through You Not Like Me And I’m Not Like You #BrooklynGoHard #ConeyIsland” Before the shooting happened, the man is said to have murdered his girlfriend earlier in the day in Baltimore, according to the New York Post. The photo above may have been taken after this murder.

Earlier today, an armed man walked up to two NYPD officers sitting in their patrol car and opened fire. Both officers were killed in the attack.

The shooting took place near Myrtle and Tompkins Avenues in Bedford-Stuyvesant.

After the shooting, the gunman ran into a busy subway station and was found with a gunshot, apparently self-inflicted.

Previous article: Two NYC Cops Shot And Killed While Sitting In Patrol Car Next article: Why I Carry: Man Gets Shot During Robbery Setup