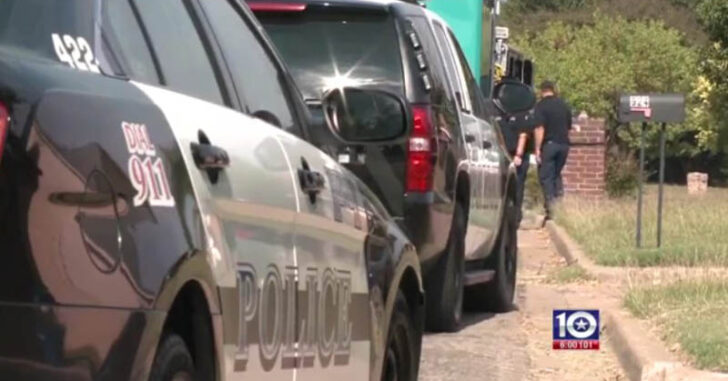 HEWITT, TEXAS — A former Marine successfully stopped an attempted home invasion, but the execution was a little off.

Eric Walters awoke around 1:45am Friday to someone knocking on his front door. Armed, he went to the front door and looked through the peep hole and saw a man on the other side.

…and against his better judgment, [he] opened the door.

As soon as Walters opened that door, another man came running around the corner armed with a gun. That’s when Walters, realizing that opening the door was a bad idea, slammed it shut and fired six rounds through the closed door.

The bad guys got away, and it is unknown if either were hit by gunfire.

While Walters was ultimately successful in stopping the attempted home invasion, it could have turned against him quickly. Once that front door is opened, your advantage decreases dramatically. What if the first guy at the door had pulled a gun and fired? Would Walters have had time to react? What if five guys came around the corner instead of just one?

Then, the act of firing through a door (or any other structure) is typically frowned upon. In this case, Walters seems to have had a clear view of what was happening in the moments before firing the shots, but it doesn’t change the fact that he was still shooting blindly.

Walters was protecting his wife and two children who were inside the home at the time of the incident, and while I certainly can’t fault him for taking the steps to defend them, he could have put them in more danger by opening the door.

How To Handle A Middle Of The Night Knock

Walters started off perfectly by arming himself before going to investigate. The last thing you want is to be down in front of your door, unarmed, and then be face-to-face with the bad guys after they break it down.

Finding out who is on the other side of the door is important, whether it’s via a peep hole, video surveillance or other method. At no point should you ever open the door for a middle-of-the-night knock. The smarter thing to do is to call police while staying inside your home. If the person happens to be an innocent stranded motorist, the police can sort it out when they arrive. Be sure to let the 911 operator know that you are armed, and where your location is inside the home. A description of what you’re wearing might not be a bad idea, either.

When All Bets Are Off

Plus, you aren’t opening yourself up to any unknowns by opening that door. If you stay put, you maintain your tactical advantage and can react appropriately if someone tries to enter.

As a rule of thumb, a knock at the door in the middle of the night is never a good thing.

Another rule of thumb, shooting through an object without a clear picture of what’s on the other side can have disastrous consequences.

Previous article: [BREAKING] Aurora Colorado Movie Theater Gunman Sentenced To Life In Prison Next article: When Should You Re-Holster After A Self-Defense Shooting? Let's Take A Look...