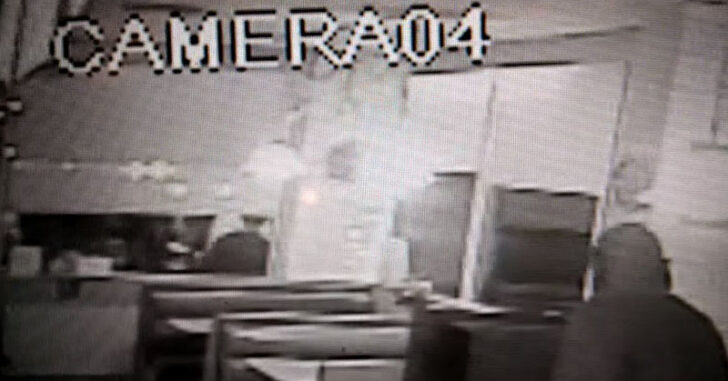 The concealed carrier involved in this incident, Steven Pappas, shared his story with us and gave permission to share it with you. Any incident like this is a learning experience for every single person that decides to carry a firearm for self-defense. Not only were no shots fired, but Pappas was able to successfully end a brutal assault and gave credit to training that he’s received in the past.

Pappas also shared an incident back in December of 2000 where he was a victim of a brutal assault, the likes of which are detailed here. At that time, Pappas did not have his concealed carry permit but told us that he wished someone were in the area with a gun that could have stopped the assault.

Here is his story about the recent incident:

On 10/31/2015 at approximately 21:06, I drew my permitted, concealed carry handgun to defend a boy’s life.  I witnessed this boy being beaten by two men.  One man was swinging with extreme force, what appeared to be a wooden bat.  At the same time, the other man was kicking the boy while the boy was on the ground, curled up in a ball, trying to cover his head. The boy on the ground was bleeding from his head and was not aggressive in anyway when I approached these three people.

I was directly outside my place of business near the southeast corner of building in the parking lot next to my truck.  I was speaking to my friend Jerry Cleveland when we both heard some commotion. We saw some people running in fear and heard loud impact strikes coming from the west side of the building.  We both hurried toward the west side to see what was happening.  When I reached the middle of parking lot near the south side of the building, I saw one man near the southwest corner.  He was a male Hispanic wearing a Black Hoodie, swinging what appeared to be a wooden baseball bat.  He was striking a boy in the head with the bat.  He did this 3 times in my presence.  I saw blood coming from the boy’s face.  Another man was a male Hispanic in a Gray Hoodie and this man was kicking the boy in the torso at the same time as the other man was striking with the bat.  I yelled “Stop and drop the Bat” and drew my handgun from my holster and pointed it at the man with the bat.  Both men stopped and the man with the bat took a step toward me and held the bat in a ready to swing position.  The other man yelled, “He’s got a gun” and the two men began to back step and then turned around and ran southbound on Bellflower Boulevard toward the Bike/Walk path and Old Pacific Electric Train Station.  I positioned myself between the boy and the two men while this was happening to take their attention off of the boy while he was on the ground and slowly getting up.  I held my handgun at a low ready position until the attackers were out of view and then re-holstered at that time and concealed my handgun with my t-shirt and cover shirt.  I did not fire any rounds during this entire incident.

I then instructed Jerry Cleveland to go inside the restaurant and dial 911 to dispatch Sheriff’s Deputies and Paramedics.   One of the men, (Gray Hoodie) and a different man, (male mixed Hispanic/Black in a striped shirt) began to head towards us by walking northbound on Bellflower Boulevard from the Bike/Walk path.  I discreetly took my handgun out of my holster and hid it behind my leg with the safety off in condition zero/ready to fire position.  The man in the Gray Hoodie had his left hand concealed in his hoodie pocket the entire time.  I was careful to watch and see if he produced a weapon.  I again put myself between the boy and the attacker(s).  The man in the Gray Hoodie continued to walk without any comment or aggressive action and passed our location.  At the same time, the man in the striped shirt walked by with his empty hands visible and said “She got your phone, she got your phone” and chuckled as he walked past and away from our location.  Once they were at a safe distance, I again re-holstered my hidden handgun and concealed it with my t-shirt and cover shirt.  The phone he mentioned was the boy’s iPhone 4 that was taken from him during the attack before I approached the men and stopped the attack.  According to the boy, a female accomplice took the phone before he fell to the ground and was beaten.

Shortly after, the LA County Sheriff’s Deputies arrived.  I had my CCW permit and Driver’s License ready in my hand and handed them to the first deputy that arrived, Deputy Trejo.  I let him know I was armed and that I had drawn my handgun to defend the boy’s life before they arrived.  He examined the permit and asked if I worked for the Sheriff’s Department or Coroner.  I replied with “No, I am part owner of this restaurant.” He then spoke with the victim and took all of our statements and took a picture of my CCW permit and Driver’s License.  I was not disarmed, not searched, not detained, or handcuffed at any time.  I was informed by Jerry Cleveland, that what I thought was a bat appeared to be a wooden handle to a full sized sledge hammer.  The man swung it so hard that part of it broke off and was left on the sidewalk.  Deputy Trejo took the broken piece that was left on the sidewalk and put it in his vehicle.   I made a copy of our security camera DVR footage on a flash drive and gave it to Deputy Trejo for his report.  He gave me a copy of LA Counties “Report Information and Victims’ Bill of Rights” Lakewood Station: Assault with a deadly weapon: Report number: 015-21945-1337-053.  I have attached a photo of this Report Information to this letter.   Deputy Trejo and several other deputies searched for the men that were beating the boy but were unable to locate them as of last night.  The boy received medical attention from LA County Paramedics for his bloody nose and face.  He did not leave in the ambulance because the paramedics were able to stop his bleeding and he did not want to go to the hospital.  I was thanked by the boy, “DJ” a freshman in high school and his family.  I am thankful I was able to defend this boy before he was severely injured or killed.

I had a defensive gun use on Halloween night at our place of business. It was a very stressful experience. I train regularly with Allsafe Defense Systems, Artemis Defense Institute, and 5 Arrows Tactical Training. This training helped me do the right thing by helping a boy being beaten with a sledge hammer handle.

After the assault, the victim’s Mother took to a Facebook group to express her thanks for the actions of those who stopped the assault on her son.