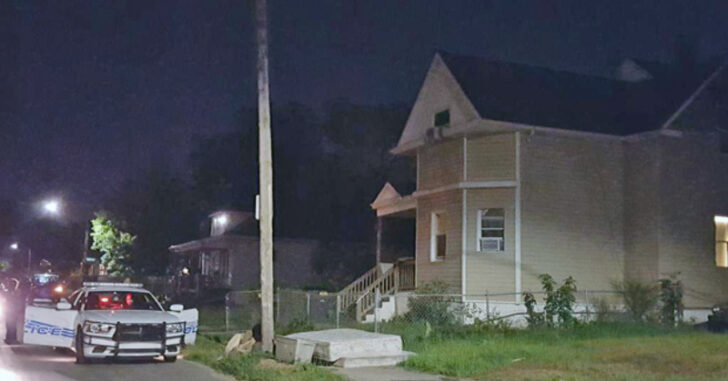 DETROIT, MICHIGAN — We all know Detroit is pretty much a veritable canary in the coal mine for what happens when society goes in the dumper.  So, if you live in Detroit and you hear people moving around outside your home, why would you open the door to investigate?  Armed or not – it’s a dumb idea.  In general, it’s a bad idea.  In an open entrance, you’re in a restricted space.  It’s hard to move left or right and you’re pretty much stuck moving forward or back – really bad options in a gun fight.  So, the Detroit News broke the story of a homeowner doing precisely this.

According to the newspaper, the homeowner was a concealed carrier in the State of Michigan and he heard noises outside.  Grabbing his firearm, he went to investigate.  Opening the door, he encountered an armed man described as in his 20s, wearing a black scarf over his face.  The time?  3:15 am.  We can be perfectly confident that nobody wearing a black scarf over his showing up at 3:15 am is there to sell you encyclopedias.

Side-note: If you run into this modus operandi (MO) for an encyclopedia salesman – advise them against this practice.  People are generally cranky and irritable when they’re woken up at 3:15 am.

Back to the story.  So the homeowner, stuck in the doorway, encounters a masked bandit.  The masked bandit has – drum roll – the element of surprise and opens fire.  The homeowner takes what was described as a non-life-threatening gunshot wound and promptly returns fire.  Masked bandit runs off into the night.

Police and EMS arrive and get him safely to the hospital where this story essentially ends.  Because nobody else showed up around the same time with gunshot wounds, we can safely assume this armed trespasser will not be getting caught this time.

Why does this story sound familiar?  Well, we covered a pretty close rendition of the same story nary a week ago when a woman was forced to use a bat, a crowbar, and her pistol after she opened the door to check out an intruder outside her home.

If you hear someone moving around outside your house – call the police.

If you have friends who show up drunk to your place and want to crash out on the couch – ask them to call in advance.

Reduce the number of reasons you need to step a foot out the doorway to figure out friend from foe at 3:15 am.  Don’t do the intruder any favors.  Let the thug make the incredibly foolish mistake of barging through your doorway or window.

Previous article: Americans Should Be Allowed To Carry Guns On Airplanes Next article: Concealed Carry Trainer Negligently Shoots Student, And It's Not His First ND (*facepalm*)