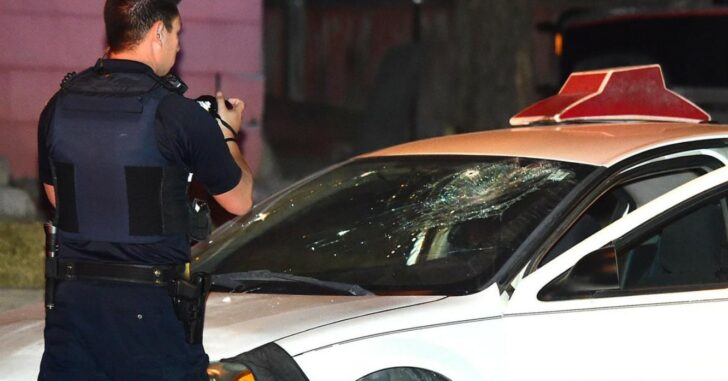 BILLINGS, MONTANA — A pizza delivery driver isn’t facing any charges so far, in an apparent self-defensive shooting after he tells police an armed man tried to rob him. I say ‘so far’, because these naturally have to go through a process for them to determine actual self-defense. It’s all a part of the process.

“The pizza delivery guy was attempting to deliver pizzas, when he claims that he was robbed. While in the process of being robbed, in self-defense he’s claiming, he fired a weapon, striking the suspect,” said Billings Police Sgt. Clyde Reid.

A white Sedan at the scene had a cracked windshield with visible holes. Reid said the suspect was struck in the abdomen, and then ran into a nearby alleyway where officers apprehended him. The delivery man remained under questioning by police, while the suspect was transported to St. Vincent Healthcare.

Robberies in the county have increased by 44% compared to the same timeframe in 2019, that increase largely due to the coronavirus pandemic.

This armed citizen knew that his job was a risky one, and decided to carry a firearm with him while working his deliveries. Hopefully he won’t lose his job over being armed at work, as it wouldn’t be the first time.

In the end, if your employer does have a ‘no guns’ policy, you have a simple question to ask yourself: What’s more important; my job or my life?

Previous article: BEGINNERS: Concealed Carry "MUST HAVES" - VIDEO Next article: Man Moves Quick To Get First Shot On Armed Robber Who Has Gun Pointed At His Face