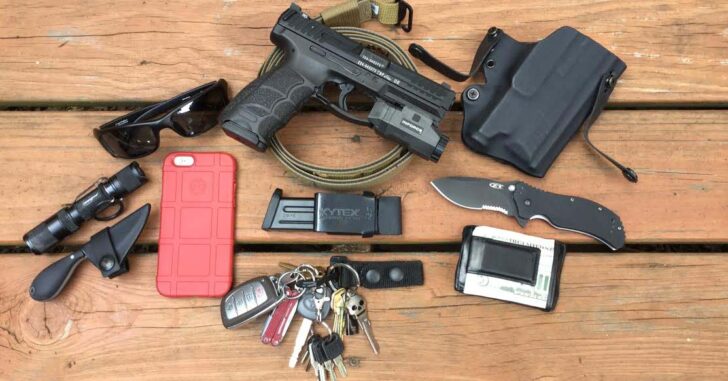 1. I carry an HK VP9 with an attached Inforce APL weaponlight. The only mod to the gun was to add Trijicon HD night sights. I carry a spare mag too, of course, plus supporting gear (a Clinch Pick, ZT 0350, PowerTac E5 flashlight, Volund Gearworks Atlas G-Hook belt, phone, keys, etc…)

2. I carry my VP9 in a JM Custom Kydex light-bearing holster. Tony at JMCK is a great guy to work with and he makes phenomenal gear that he stands behind 110%.

3. I chose to carry the VP9 because it proved itself, hands down, to be the best striker-fired pistol I have ever shot. Choosing a new carry gun was part of a personal initiative I embarked on at the beginning of the year to focus on the fundamentals with a single gun for at least a year… I wanted something mid to full size, since shootablility was my primary driver. I adapted my gear and clothing appropriately to allow for daily carry and, I must say, it has been much easier than I previously thought it could be, back in the days of carrying tiny little guns that were easy to conceal but hard to handle and even harder to shoot well at speed. I opted for the Inforce APL because it was light and small enough to allow for concealed carry in a good holster and I find the controls on it to be much more intuitive than those of the Streamlight and Surefire models.