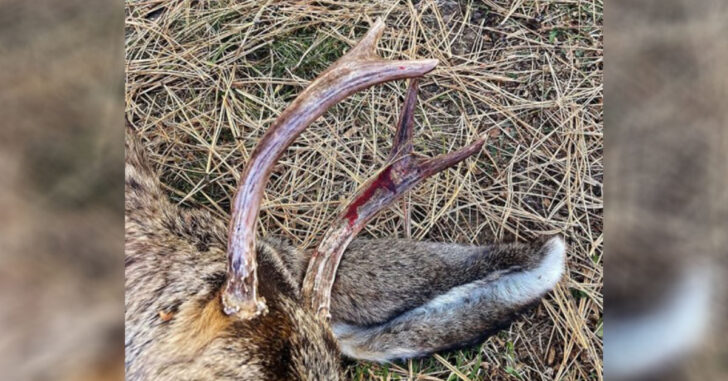 BLACK FOREST, COLORADO — A Black Forest resident who went out for a walk was brutally attacked by a young buck deer that her neighbor had raised from a fawn.

Speaking from her hospital bed, the victim said that she was “surprised to see the deer following her and then shocked when it attacked”, knocking her down repeatedly and goring her with its antlers.  She was able to escape the repeated attacks after squeezing between two cars in her garage.

The Colorado Department of Parks and Wildlife (CPW) officer who responded to the incident on October 16, 2020 was met by the young deer clearly displaying the evidence that would incriminate it in the attack. His antlers were covered in the fresh blood of the woman. As it “aggressively approached” the officer, it was shot and killed.

After being treated for serious lacerations to her head, cheek and legs, the woman was released following an overnight stay in the hospital.

CPW’s Pike Peak Region Wildlife Manager Frank McGee made the following statement: “We can’t say it enough: Wild animals are not pets. Feeding deer habituates them to humans. They lose their fear of humans and that leads to these outcomes that are tragic for both wildlife and people. Injured and orphaned wildlife should be taken to licensed wildlife rehabilitators.”

The threat to our personal safety isn’t always from humans.  Most wild animals, especially deer, will perceive humans as the threat and avoid them; however, when they become acclimated to daily human contact they can lose that perception and for reasons unknown to us, they become predators.

If the young buck had threatened other people before the wildlife officer arrived, any citizen with a gun would have been justified in euthanizing this deer.