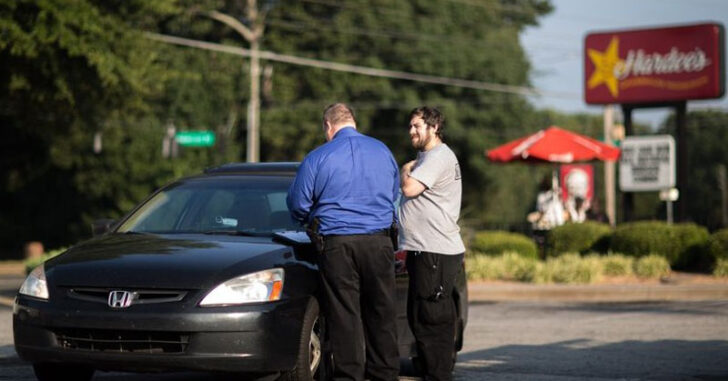 ATLANTA, GEORGIA — A 25-year-old man is lucky to be alive after coming face-to-face with two armed robbers, and he has both his quick thinking and concealed carry firearm to thank.

That man, Joshua Hamadi, has a night job booting semi-trucks that are parked illegally on private property. During his 1 1/2 years on the job, he’s never had any real problems. However, the job can lead him to some less than desirable places.

Early Tuesday morning, things changed quickly for Hamadi. While he was in a parking lot processing a truck he had just booted, a black Kia Spectra pulled up behind him and stopped.

“For five or ten seconds they didn’t do anything,” he told The Atlanta Journal-Constitution. “… I thought that was odd. I had my gun in my holster waiting to go, and pulled it out just in case something happened.”

And something did happen. Two people got out of the car wearing ski masks. They ran up to Hamadi and pointed guns in his face just feet away.

“My first reaction is, my life or theirs,” he said. “I pulled the gun and started shooting.”

Hamadi hit one of them in the hip. That person turned out to be a 15-year-old boy who has apparently made some bad life choices early on. The other attacker and another accomplice took off in the car, leaving their wounded friend behind.

While Hamadi kept the wounded suspect on the ground, he told the driver of the truck he had booted to call 911. Then, just moments later, the two other suspects came back. Wasting no time, Hamadi emptied his Glock toward the vehicle, hitting a tire and sending them in the other direction yet again.

“You can practice and train all you want, but it comes down to how you react in the situation,” he said. “I was very surprised by myself. I was able to keep very calm. My adrenalin kicked in but I was still very calm.”