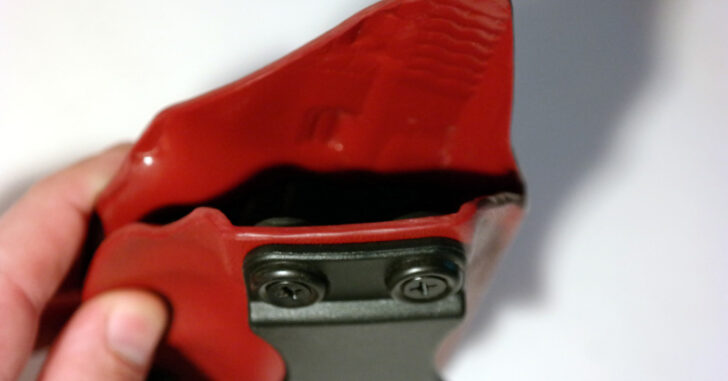 In the parking lot of Wildlife Taxidermy in Auburn, New Hampshire, I met up with a local holster manufacturer who specifically makes Kydex frames for concealed and open carry.

The meeting itself took about a week to schedule because, as it turns out, the owner of the company is the sole manufacturer – and works another full-time job.  When we finally did meet, he brought a Kydex inside the waistband holster (IWB) he had finished the previous day.  In my hand, it looked and felt much the same as any of the other Kydex holster I have.  I forked over the cash and went about my day.

When researching his company, Free State Holsters, I found the company just had a small Facebook page and not much else.  His holsters are produced out of his home and sold by word-of-mouth and carried by some local gun shops.

I looked up the process for how to make a Kydex concealed carry holster.  Turns out, the basics aren’t complicated.  Below, you’ll find a quick 8 minute overview of the process.

While the basics may not seem hard, there’s a lot in the manufacturing itself that requires experience and finesse.  So how does the quality of a small time manufacturer stack up to nationally distributed IWB concealed carry holsters?  There’s only one way to find out – I committed to using it as my EDC holster.

Just like in my review of Lenwood Holsters, I found I needed to loosen the retention quite a bit for the IWB Free State Holster.  Molded to fit my Smith & Wesson M&P Shield .40, it was very snug.  Definitely a high retention IWB holster for those interested. The belt clip on the back was considerably more robust than the Lenwood Specter clip – even though both were made from exactly the same material (thermal injection molding).  I appreciated the lack of 180 degree bends in the clips Free State Holsters used because this means the clip has fewer stress points to crack or break with time. While wearing it, I definitely noticed it was a little bit thicker.  The outside appeared matte and the inside was glossy.

In terms of retention to the specific weapon (M&P .40), it performed exactly the same as any of the other inside the waistband holsters I’ve used.

As my everyday carry (EDC) IWB concealed carry holster, I didn’t notice too much difference between it and the Lenwood or Alien Gear I typically use. The biggest problem is a protrusion that covers a portion of the upper assembly.  I first noticed it when I tried to switch my pistol from safe to fire at the range.  The Kydex covers the safety lever.  If you use a Glock, you probably wouldn’t notice a thing.  For an M&P Shield .40 caliber, it’s noticeable.

All rankings in each category are out of 5.0 possible points, with 3.5 being “industry average”.

At an MSRP of $50, it was exactly the same price as Lenwood’s Specter  IWB and about $11 more expensive than a Cloak Tuck 2.0 from Alien Gear.  And that’s not even counting the many other notable up-and-coming holster manufacturers out there.  Price points of $32 to $60 are commonly accepted prices.  And what you’re getting for what you pay for – it really didn’t seem to stand out price-wise.

Final Verdict:  It’s made to the same quality I’d expect from a major manufacturer.  It served well as my everyday holster.

It’s great that so many are doing a very reasonable job at making these holsters in the convenience of their own home.  Certainly in the case of Free State Holsters in Manchester, NH, I was impressed with the competitive product he was able to produce for his scale of manufacturing.

If I were to put a price on that specific holster, I would have put it at $35.  Because at that price, you’re able to interest people who may otherwise be uninterested.  Alien Gear and Crossbreed are two excellent examples of (initially) small production firms that quickly escalated due to a simple, effective product line at an extremely affordable price.  It’s not a bad idea to follow suit.  Let your product design stand out.

And for those out there looking to turn holster manufacturing into a cottage industry with dreams of scaling up – don’t be afraid to innovate.  If you’re able to take a great idea, like a Kydex high-retention holster, and take it in a new direction that’s safe – we here at Concealed Nation are definitely interested in hearing from you.

Previous article: BEGINNERS GUIDE: TTAG Writer Sarah Tipton's Guide To A Woman's First Gun Next article: Neighbor Defends Elderly Woman After She Was Shot By Her Own Grandson