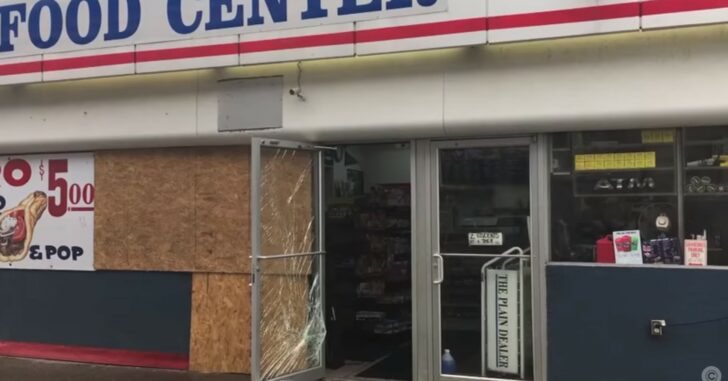 CLEVELAND, OH — A man working at a 24-hour gas station in Cleveland, Ohio, had the shock of his life when a group of thugs attempted a smash-and-grab at the ATM in the gas station.

The incident happened about 3:30 a.m. Thursday at the Marathon gas station on Lorain Avenue at Fulton Place.

Employee, Ala Allan, 31, said his brother, Ahmed Allan, was working at their father’s gas station when two vans pulled into the parking lot.

One van tried twice to smash through the front doors and into the ATM, Allan said. The impact caused the door to splinter.

Ahmed Allan is a conceal-carry permit holder, according to his brother. He grabbed his gun and confronted the suspects.

Ala Allan said his brother fired four shots at the two men. One man ran away and the other drove away in the other van, Allan said.

Police have not said if they have made any arrests.”

Although having a van smash into your place of work is extremely unlikely to happen for most of us (or at least, I hope so), there are still some extremely valuable lessons to be learned from Ahmed Allan.

1. This guy was carrying at work.

I know this is not an option for everyone, but if you can do it, do it. Every day.

2. Never let at attack shock you.

In an ideal world, attacks wouldn’t surprise us either, but that just isn’t a realistic expectation. But if, say, a van comes careening into your store, don’t panic, get thinking.

Previous article: #DIGTHERIG - Scott and his Smith and Wesson SD40VE in an Alien Gear Holster Next article: [CCW IN ACTION] Teen Shot And Killed After Picking Wrong Victim In Chicago Bank Parking Lot