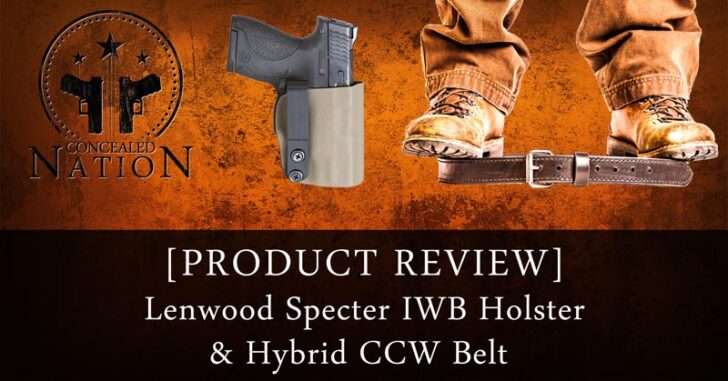 Recently, I had the opportunity to switch up my normal daily carry routine with a concealed carry belt and inside the waistband holster from Lenwood. Lenwood is a growing company based out of Missouri that specializes in durable leather belts and concealed carry holsters.

Their two major holster platforms are the Wraith (OWB) and the Specter (IWB).  The Specter was of interest to us over at Concealed Nation because obviously we’re always looking for well crafted, ergonomic holsters for daily carriers. When I finally got a chance to try it on, I was suitably impressed. The Specter – Light, Efficient, No Nonsense

It took a couple days to really get used to the Specter because, up until that point, I had always used a wider support inside the waistband holster. This IWB was extremely streamlined and beautifully decorated. More importantly, it proved to be quite enduring through my day-to-day activities and taking it to the range.

The Specter is a one-piece kydex shell molded to fit my M&P Shield .40 S&W like a glove. And surely it did. One thing I hadn’t prepared for was just how tight! From factory default, the Specter’s retention was like a vice grip. Thankfully, the shell has two adjustable retaining screws to ease up a little bit.

Where the Specter Wins

As a daily carrier, it’s nice to be able to position a holster quickly and easily. If I want to go appendix carry – the Specter complies. If I want to go to my traditional 4 o’clock, it slides seamlessly. Because of its single clasp, it’s simple to reposition around the belt. Once it’s in position, however, I could do jumping jacks without it moving an inch.

What Haunts the Specter

Price wise, the Kydex® IWB shell system is on par with other manufacturers.  It sufficiently demonstrates its worth as a daily carry solution and is still better fit than most major commercial holsters on the market.  The only down side is each conceal carry weapon you plan on using will likely need its own shell – and right now Lenwood only covers the major players.  Sorry CZ-75D.

If you own a Glock, Ruger, or Sig – you’re probably in luck. They’ll be more selection down the road, I’m sure. This is the real MVP.  While the Specter certainly proved itself to be a versatile IWB holster, this hybrid belt wound up being my favorite part.  For years I just used whatever flimsy department store belt I had to attach my IWB holster – not thinking anything of it.  Since wearing an oil rubbed hybrid belt from Lenwood, I see the error of my ways.

A durable, well stitched belt with a full grain outer layer of thick leather provided me with better back support and helped prevent my waistline from slumping when I carried concealed.

“Why is it called a hybrid belt?”

It’s called a hybrid belt because in between the two layers of thick leather is a layer of PVC-coated polyester webbing.  This serves to act as an extra sturdy backbone.  With this addition, I’m almost entirely certain this belt may outlive me.

As a combined system (belt and holster), they work extremely well together.  As I’ve since found out when I use my other IWB holster with the hybrid belt, it plays well with others.  And this has become my daily belt.  The only reason the Specter hasn’t become my daily carry is because I prefer a CZ-75D – though I still enjoy my M&P Shield.  For my M&P Shield, this HAS become my primary IWB holster.

If I’m going to be driving around – the Specter is far more comfortable than my bulkier IWB holsters.

As Lenwood grows and expands into new ideas, they’ve certainly stayed true to good craftsmanship.  Personally, I wish they made an old school style Cowboy belt with OWB holster.  I like how they were able to construct a solid IWB holster out of Kydex® without making it bulky and cumbersome – but I feel their leather work is truly where they show the most innovation.

All rankings in each category are out of 5.0 possible points.

It’d Be Awesome If: A true hybrid OWB/IWB version of the Specter existed that used an aluminum shank or similar for the clasp.  Having the convenience of switching back and forth between OWB/IWB would be amazing with this particular style of holster.