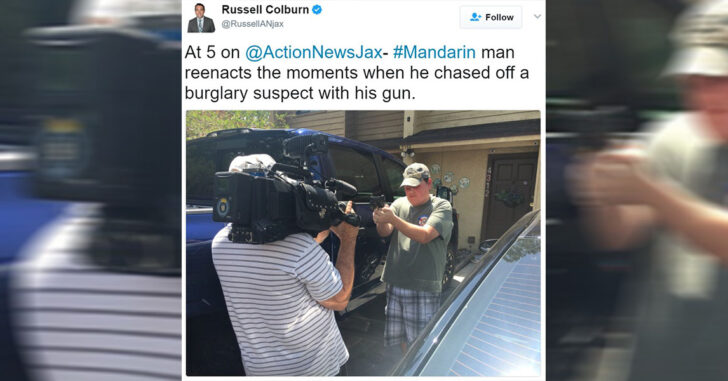 JACKSONVILLE, FLORIDA — I’m not going to mince words on this one, because it’s the most irresponsible thing I’ve seen all day.

A Jacksonville man was being interviewed by a news station about an incident that occurred in his driveway. Early one morning, the man saw a person going through his vehicle. He decided to take action and approach the suspect with his handgun.

He told Action News Jax about the incident;

“I was like, ‘Put your hands out where I can see them! Drop to your knees!’ And I said it four or five times,” the man said. “He would not do it. And the whole time I’m thinking what was in his hand was a gun. But what it turned out to be was my radar detector, so had he turned around, I would’ve shot the guy not knowing any better. So it’s real lucky he didn’t die that night.”

In the video below, we can see the interaction, as well as the man chasing after the suspect down the driveway.

Mistake #1: It’s never wise to chase after a suspect with your firearm. What’s the plan here, really? Unless you’re planning to shoot that person in the back, there is no reason to give chase. If you do decide to go outside and confront a suspect –not knowing if they’re armed or not– instead of calling police, that’s your call. But chasing them as they’re fleeing isn’t very wise IMO.

Mistake #2: During the interview about the incident, someone had the bright idea of having the man standing directly in front of the camera. Not bad so far, since that’s how interviews are typically done. But wait, it gets better! The bright idea was to have the man point his handgun right at the camera and cameraman. As far as irresponsibility with firearms goes, this is up there on the list.

I’m not sure who had this light bulb go off inside their head, but at least one other person on the interwebs is on my side. See the comment below on the reporter’s twitter post: Good job, Sean. It’s good to keep things in check. As for the reporter, it’s great that he respects it, but does he really respect it?

Showing the world, on a news station, that you feel pointing a firearm at someone is acceptable… is irresponsible.