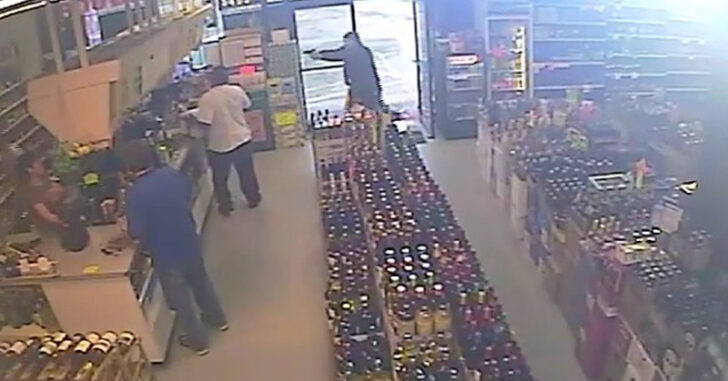 CONYERS, GEORGIA — An armed citizen is being hailed a hero after drawing his firearm and stopping a mass shooting inside a Georgia liquor store.

In the video above, you can see suspect Jeffrey Scott Pitts, 36, enter the store and begin to open fire on anyone he sets his eyes on. What the video doesn’t show is 44-year-old Todd C. Scott, off camera, drawing his firearm and shooting back at Pitts.

Once Pitts was met with armed resistance, he immediately fled the scene.

Rockdale County Sheriff Eric Levett held a press conference and hailed Scott a hero for his actions and quick thinking.

“I believe that if Mr. Scott did not return fire at the suspect then more of those customers would have hit by a gun,” said Levett. “It didn’t appear that he cared who he shot or where he was shooting until someone was shooting back at him. So in my opinion he saved other lives in that store.”

Pitts killed the store clerk and a customer in the store. After he left, he went to his home where he wounded both of his parents. Police arrived at the home and Pitts began firing at them. He was killed by return fire.

During the press conference, Levett gave details as to what occurred before the shooting.

Pitts, a frequent customer, reportedly went to the package store sometime around noon where he became involved in an argument, possibly over money owed to the store. At some point the store clerk took Pitts’ ID and refused to return it until Pitts reportedly went out to his car, retrieved a handgun, returned inside the store and pointed it at the clerks. He then took his license and left the store.

The incident was reported to the Rockdale County Sheriff’s Office and deputies began to look for Pitts. At one point, Levett said a deputy went to the suspect’s house on Ebenezer Road, but Pitts was not there.

Several hours later, shortly before 5 p.m., Pitts returned to the store and immediately began firing. There were apparently two clerks and four customers in the store at the time.

There is no doubt in our minds that Scott saved lives by being armed –and fighting back. Well done, Sir. We are lucky to have a person like you among us. Thank you for your quick thinking, and thank you for making the decision to arm yourself.

Previous article: Vince Vaughn Voices Opinion: Guns Should Be Allowed In Schools Next article: What Goes Bump In The Night? 6 Tips On Clearing Your Home