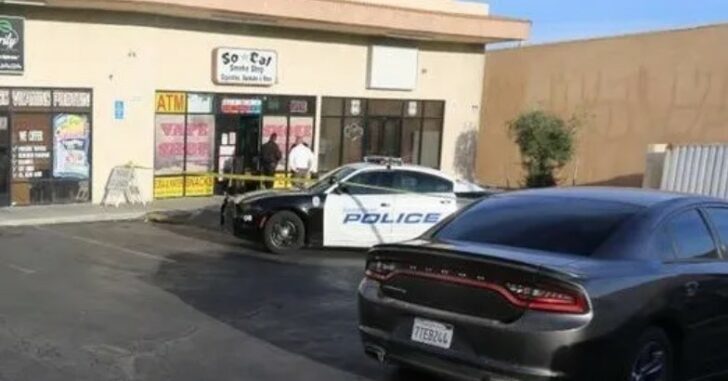 BARSTOW, CALIFORNIA – An armed suspect was shot dead by an employee during an attempted robbery at the So Cal Smoke Shop on the afternoon of January 6th. Police were dispatched to the store at 2:37 p.m. for a report of a person shot during a robbery.

Officers arrived at the 1251 East Main Street and found the suspect suffering from multiple gunshot wounds. They initiated CPR on the man, with Barstow Fire Protection District personnel taking over upon their arrival. Despite the life-saving efforts, the man was pronounced dead at the scene.

Police investigators interviewed multiple witnesses, reviewed surveillance video from the incident and processed the scene. The investigation revealed that the suspect entered the store, pointed a handgun at an employee and demanded money.  The employee retrieved a handgun and shot the suspect.  BPD was assisted on -scene by a deputy coroner from the San Bernardino County Sherriff’s Department Coroner Division and a deputy district attorney from the Sand Bernardino County District Attorney’s Office. The investigation is on-going, and the identity of the deceased suspect has not been released.

The employee displayed great courage in retrieving a defensive handgun while being held at gunpoint, and apparently fired at and hit the suspect multiple times. Training dictates that in a life-or-death situation, when fearing for one’s life and using lethal force against lethal force, that the defender shoot to stop the threat and continue firing until the threat has been stopped. Sometimes that is accomplished with a single shot, sometimes it requires multiple shots.

Previous article: Michigan Bans Open Carry Of Guns Inside State Capitol Next article: Bear Spray Can Be An Effective Tool Against An Aggressor (Or In This Case, Multiple Aggressors)