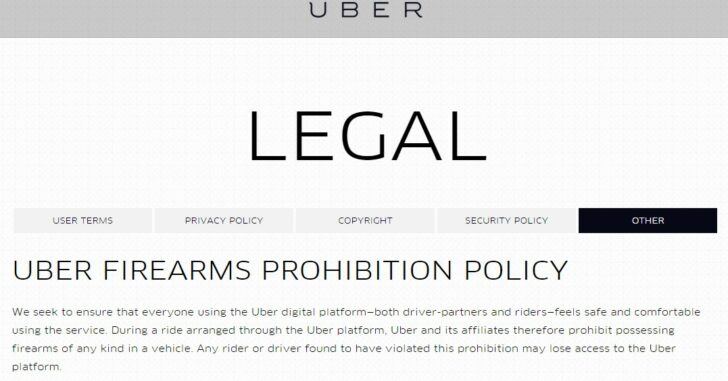 The ride-sharing company Uber, who made it’s first appearance on Concealed Nation back in April after one of it’s drivers successfully stopped an attempted mass shooting with his firearm, has changed it’s stance on firearms in their vehicles.

The exact reason for the policy change is unknown at this time, but it’s indeed a recent change. We have reached out to Uber for comment and are awaiting a reply.

So, what’s the new change?

They’re now prohibited in Uber vehicles, per their new policy.

We seek to ensure that everyone using the Uber digital platform—both driver-partners and riders—feels safe and comfortable using the service. During a ride arranged through the Uber platform, Uber and its affiliates therefore prohibit possessing firearms of any kind in a vehicle. Any rider or driver found to have violated this prohibition may lose access to the Uber platform.

What an uber disappointment. Whatever prompted the change in policy, they were certainly (seemingly) more open to firearms back in April when they issued a statement after their driver saved the day:

The Uber driver had dropped off a passenger minutes before the shooting occurred, said Uber spokeswoman Jen Mullin. She had no comment on the driver’s actions other than to say the company requires all its drivers to abide by local, state and federal laws pertaining to transporting firearms in vehicles.

Another popular ride-sharing service, Lyft, has had a similar policy in place for some time. So if you’re a firearms enthusiast and need a ride, better call a standard cab.

It’s a real shame, too, because we stood behind Uber for their response to their driver saving lives. After all, had he not been there –and armed– people would have likely died as a result.

“As a reward for saving lives with a gun, no more guns for you.” – Uber