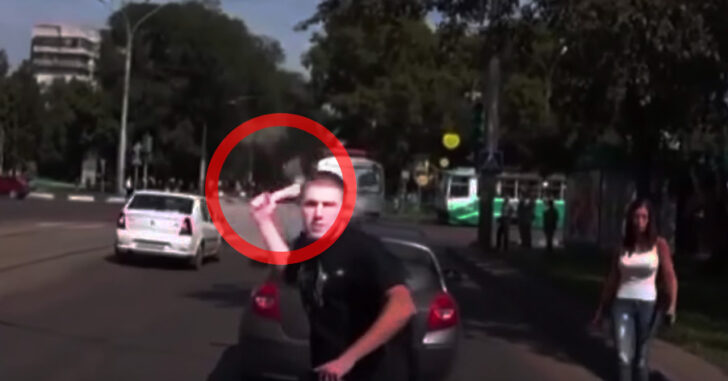 In the video above, you’ll see a Russian man and his supermodel girlfriend outside their car.  First off, dashcams in Russia must come standard with the vehicle because it seems like every insane driving video comes from Russia…  Road rage incidents occur just as frequently in the United States — but we just don’t seem to have as many dashcams recording them.

Anyhow, a young Russian man at first approaches the vehicle with a hatchet.  The driver – intelligently – backs up.  Apparently, this wasn’t good enough.  The Russian hatchet-man puts the hatchet back into his car and retrieves a pistol.  Realizing that no matter how angry he is, bullets have consequences, he decides shooting the guy’s tires is the way to go.

Okay.  As a concealed carrier, the second someone approaches my vehicle wielding a hatchet over his head, I’m supported by the law in defending myself.  With a dashcam rolling the footage, do realize you’re creating evidence which will be used by your defense as well as the prosecutor.

It’s unknown what the traffic conditions are like around the driver of this vehicle.  Who knows if he could have safely swerved around or backed up further or anything.  This is what’s called situational awareness.

Let’s do a color game.  Each color designates the sort of attention you need to be paying to a situation.

As you can see from this video – a threat goes from Green to Red awful quick.  By the time the man exits his vehicle in front of you – you’re at Orange.  The second the hatchet comes out – it’s Red.

A good steady state for a concealed carrier to maintain is Yellow.  Cautious, but not tense.  Complacency makes the majority of the people walking around you Green.  Most are not paying attention.  They may even be oblivious that the man in front of you has pulled a gun and is shooting your car.  Seriously.

So, in this situation, how do you think you should handle it?