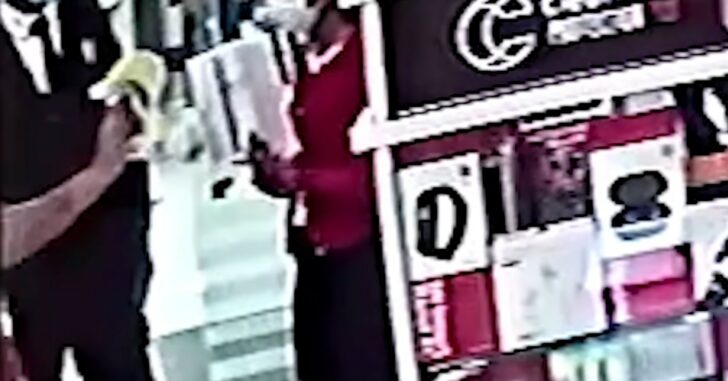 UPDATE: The guard is apparently awaiting trial in jail and based on the country’s laws, is kept in jail while awaiting trial. He is reportedly facing multiple years, if not decades, if convicted.

An armed guard approached a couple who the bank wanted out of the building. The man became agitated and argued with the guard, eventually throwing a punch his way. The guard draws his gun, chambers a round (more on this later), and shoots the guy right in the head, killing him.

The guard ran off after the incident and was later picked up by police, and ended up doing 3 months in prison for this.

First, before anyone says anything, a punch can absolutely be deadly. Although rare, a powerful punch can do deadly damage, or can knock you out and as you fall down, your new head injury can change or end your life.

The problem with this shoot is the fact that the aggressor wasn’t attacking the guard when he fired. It’s hard to see how close or how far the man was from the guard, but the guard had other options like getting distance between himself and the aggressive man.

Additionally, the guard needed to chamber a round, making his firearm useless until that first round was in the chamber.

John’s narration of the video and his opinions on why this guard shouldn’t have drawn his firearm in the first place is not going to sit well with everyone. With that said, I think that we’re lacking information to say whether or not the drawing of the firearm in this instance was justified. This video doesn’t give us a clear picture of the sizes of the two men in comparison, nor any possible conditions or limitations that the guard may have that could have made this justified for him. Additionally, we don’t know what the aggressor was doing as the guard was drawing his gun. With the lack of this information, I personally can’t definitively say whether or not the drawing of the firearm was justified.

Previous article: Suspect In Vehicle Break-Ins Fatally Shot By Homeowner Next article: Drivers Come To Officer's Aid After He Is Attacked By Man On Highway