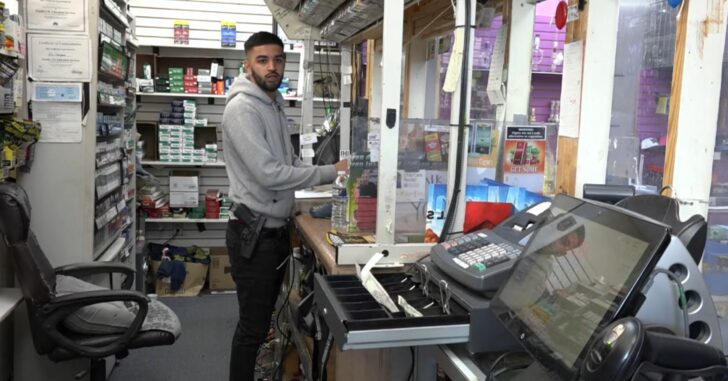 GREENSBORO, NORTH CAROLINA — The entire robbery lasted less than a minute. In that time span customers and staff were held at gunpoint. They were huddled in a corner together. Then shots rang out and it was over.

“There were three or four customers in the store. And the guy came in and put the gun on all the customers, made everyone come [behind the counter] at gunpoint,” said Adil Khawaja.

While the store employees and customers were huddled behind the register, another unsuspecting person walked into the store.

“He grabbed her by the neck, brought her back [behind the counter] at gunpoint,” Khawaja said.

The situation took an unexpected turn when one of the customers took advantage of the distraction, pulling out their own gun and firing shots at the suspect.

Bullets ended up shattering glass and piercing the store wall. The suspect was the only person struck.

The 18-year-old was taken to the hospital where he later died from his injuries, according to Greensboro Police.

A young man entered the store with a gun. In a sudden action he pulled the gun on all three customers in the store, and the employees. Before anyone could really understand what was happening, this young man began herding them together.

All the customers and employees were pushed together behind the counter at gunpoint. At that moment another customer walked in. The gunmen grabbed the new customer immediately, and turned the gun on her. It was at this point that an opportunity opened up.

One of the customers was conceal carrying. When the gunman turned his attention to the new customer, this gave the armed customer his chance. He drew hire firearm and unloaded on the armed robber. Not all shots landed on target, but enough of them did.

In less than a minuted the robbery attempt was over.

It is sad that such a young man lost his life. We don’t need to wax poetic about how we wish everyone’s life was better and full of opportunities. We know that not everyone has it easy in life. That still doesn’t mean one should turn to violent crime as the means to getting by. This young man choose this path and, unfortunately, his life was ended far to soon because of it.

The article doesn’t talk about the shooter, and in the video the store owner says the armed customer took off after the shooting. We don’t know if he spoke to police or not. If the customer fled the scene without talking to police first, this is very bad! Any time you are involved in a defensive gun shooting, you must stay at the crime scene and cooperate with police.

Well if you were ever looking for a recent example about why it’s important to carry one in the chamber, this is it. Our concealed carrier ventured out into the world prepared to defend himself. That included carrying his firearm, and having it in the ready position.

Furthermore, instead of drawing his weapon immediately on the armed robber, he waited for a better opportunity. The armed robber got the jump on him and the entire store. He made the call to hold until he felt the time was right.

When opportunity struck, and the armed robber was distracted, our concealed carrier didn’t hesitate. He drew his firearm and rained gunfire down on the bad guy.

The entire series of events took place in under sixty seconds. That is how fast these things happen. Our shooter came prepared and was read to take action to defend himself. It saved his life and possibly others as well.

Previous article: Evil Exists, In This Example It's A Punk Who Gave A Beatdown To A 67-Year-Old Veteran Next article: Burglar Forcibly Enters Home Through Locked Door, Is Shot By Homeowner