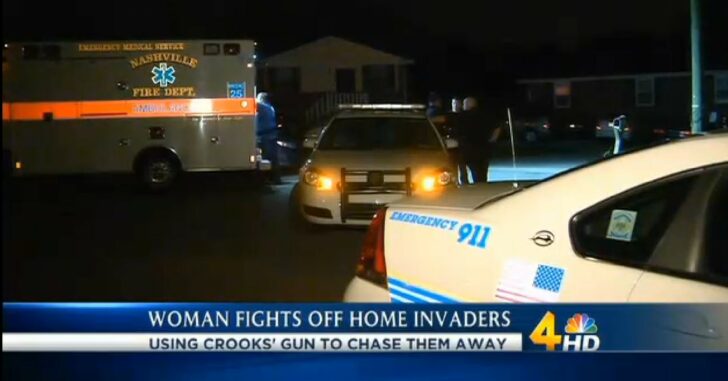 NASHVILLE, TENNESSEE — A mom home with her daughter answered the door to two men claiming to be police officers. Once the door was opened, the masked men stormed in and pointed their guns in her direction.

The men demanded that she turn over her safe, but she told them that she didn’t have one.

At that point, she started to fight the two men.

The men then dragged her outside and pistol-whipped her in the front yard. During their assault on her, she was able to wrestle a gun away from one of the men and then started firing shots at them.

It’s funny how these tough guys with guns always end up running when their intended victims turn the tables. They run away, like the cowards they truly are.

The woman was treated for some cuts and bruises at the hospital, and her child is reported to be alright.

All things considered, this is one lucky –and tough– mother.  I guess if you don’t have a firearm of your own, the next best thing, sometimes, is to just take one from the bad guys.

The two men have not been found. Hopefully, they’re sitting around somewhere… making a pact to a) never tell their thug buddies that their victim fought back and won, and b) change their career paths.

An important note to make here, since we’ve seen a lot of this recently; always be aware of who is at your door before answering it. If your current home setup doesn’t allow you to see who is there without opening the door, some changes are in order. Whether it’s a camera installed outside or a new peephole, it’s important to know what’s on the other side.

Previous article: Uber Changes It's Mind After Driver Saves Lives With Firearm, Enacts "No Firearms" Policy Next article: Why You Need To Wear A Tactical CCW Belt