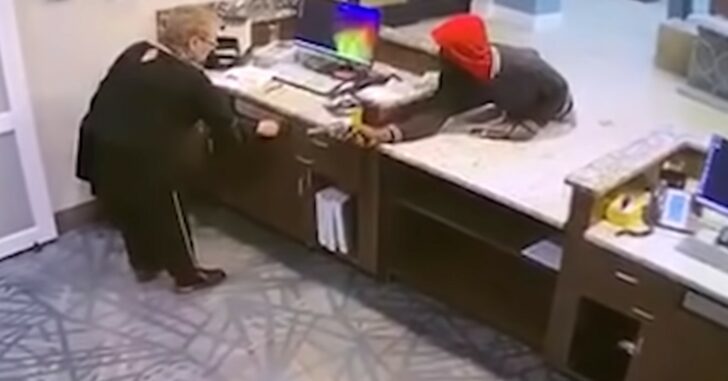 We see shocking content all the time, and we don’t share it for the shock value. Rather, we share it and discuss these real-life events to show that they do indeed happen, and then talk about ways to get yourself in a position to not end up being a victim.

The manager at this hotel was checking in a normal guest, until he announced a robbery by pulling out a revolver and pointing it at her.

She complies, fully. She opens one register and gives the entire drawer to the robber, and then she makes her way over to the second register.

The thug behind the gun decides to pull the trigger three times, killing the woman for absolutely no reason.

On his way out of the hotel, the thug encounters a guest outside and decides to shoot him 6 times, sending him to the hospital in critical condition.

The video below isn’t gory, but it will send shockwaves through any normal person who watches it.

It’s a reminder that these thugs don’t live in the same world that you and I do, and they have different rules that they play by. That’s why it’s your responsibility to get your safety in check, deciding the steps you’d take to secure your life during an encounter such as this.