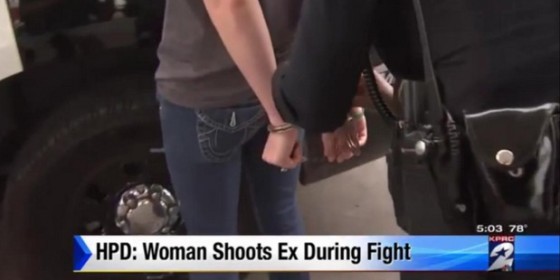 The young woman shown above was clearly justified in shooting the ex-boyfriend who attacked her.  There were witnesses.  She repeatedly attempted to disengage, and only resorted to shooting after being repeatedly attacked.  From clicktohouston.com:

The woman said she was forced to shoot her ex-boyfriend in the leg because he was threatening to hurt her. Houston police said the man started following the woman near Highway 59 and South Gessner Wednesday morning and things escalated from there. Investigators said at one point he forced his way into her car and tried to crash it. Even though it was self defense, the police handcuffed her when the put her into the police car.  This picture shows the handcuffing.  It appears that her right hand is not cuffed at this point.   I do not see any signs of a belt or a holster.

“He came banging on the window, he forced her away from the driver’s side to the passenger side, then he became the driver. Once he was inside the vehicle, he was hitting her in the face, and other stuff ensued, and she pulled out her weapon and shot him in self-defense,” said Clint Ponder, with the Houston Police Department. While the police investigated this situation, the victim was kept in the police car, under restraints, as though she were the person who had committed a crime.  This is a fairly common, but not universal, police procedure.  The police do not know who did what until they  investigate. If you are in a defensive shooting, do not be surprised if you are treated as a criminal as the police sort things out.  This is especially likely in large city police departments, where crime is common, such as in Houston.   Expect it.  In some cases you will be held in jail for a period without seeing a lawyer or a judge.   The police are allowed up to 24 hours to process your case.   If they forget or make mistakes, it can take much longer.

There have been cases where people were arrested on warrants that did not apply to them, cases of mistaken identity, where people where held in jail for months before the mistake was found.

Those are rare.  In this case the young woman was released after the preliminary investigation determined that she was justified in using deadly force to defend herself.

From the picture of her car, and her open purse, I suspect that this was a case of off body carry that worked.  It was fortunate that she was able to access her firearm and defend herself. Women are often reluctant to change their wardrobe to accommodate belts and holsters.  There are always trade-offs.   The proposed reform in Mississippi allows for purse carry in recognition of some women’s preferences.  If you carry off body, more care must be exercised in controlling the container that has your weapon.   A purse designed for that purpose offers advantages.  It is best if the firearm has its own separate compartment.   Women often developed habits to maintain control of their purse, as it  contains numerous valuable and personal items.

The ex was shot in the leg, is in the hospital, and will go off to jail when he is released from the hospital.  The woman did not submit to a beating, or to being kidnapped, or to a carjacking.   For those who say that women should not have guns to defend themselves, this is a clear counter example.