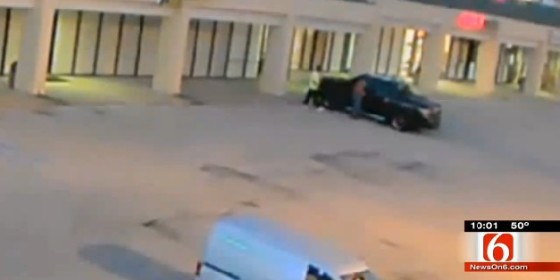 TULSA, OKLAHOMA — Here is your 2nd Amendment at work. While 84-year-old Doug Jandebeur was walking to his car from his business,  he was approached by an unidentified man who began to attack him.

The man punched Jandebeur in the face and took his wallet, then began walking toward the business where Jandebeur’s wife was still inside. At this time, we see the thug start running in the opposite direction in the video. But why?

“I pulled out my automatic and was getting ready to ventilate him,” Jandebeur said.

Jandebeur drew his .25 caliber firearm, which was enough for the thug to realize his time was up. He took off running for his life. Funny how that works.

The entire incident was captured on surveillance cameras in the parking lot.

Jandebeur ended the news interview with this: “Anybody that doesn’t arm themselves is asking for trouble.”

Previous article: Employer: You Can't Carry At Work. Now What? Next article: [VIDEO] As Scary As It Gets: Man Is Downrange During Shooting Competition, Nearly Gets Shot