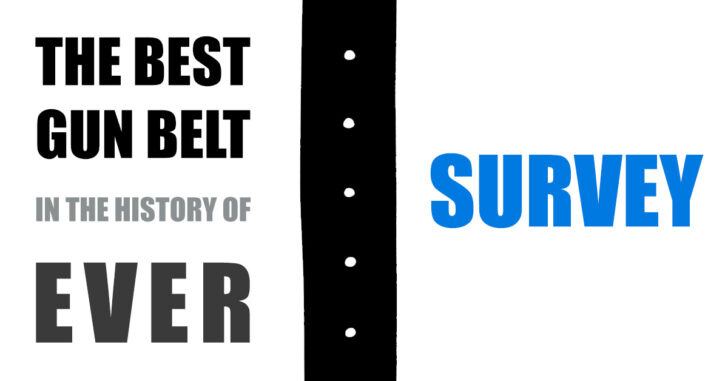 We’ve done holsters, and we’re now moving on to different categories in the concealed carry world.

For the first time ever, we are going to find out which belt companies offer the best gun belts for armed citizens.

This survey is much simpler than our Best holster survey, but will still provide users with valuable information once the results are tallied.

In the quick form below, let us know which Gun Belt Manufacturer is your absolute favorite! Let the world know which gun belt is King!

Any gun belt company may share this page URL to give their fans access to the survey. The text associated with the sharing of the URL should only inform your fan base of the survey and nothing else. Examples;

Gun belt companies may not entice or solicit responses by offering any type of giveaway for participating, or any other similar method in an attempt to solicit participation, other than providing the link to this page. Gun belt companies will also be disqualified if they engage in any paid advertising to promote this survey to their fan base. Any gun belt companies found to engage is such activity will be immediately disqualified from the poll, at the discretion of Concealed Nation. When in doubt, just ask!

Previous article: [REVIEW] The Byrna HD - Non-Lethal Self-Defense Next article: [VIDEO] Here's Just One Reason On Why We Should Avoid Conflict At All Costs