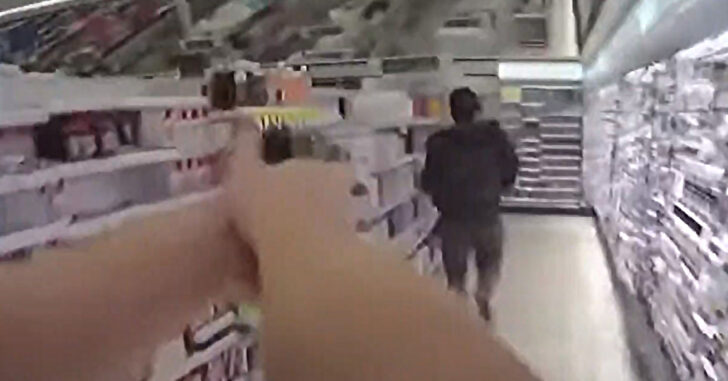 With the bad press and bad feelings towards police officers this year, it’s important to look at all sides. For example, I agree that some officers use excessive force, but I also believe that they’re the minority.

Police show incredible restraint every single day when encountering people as they work, even when their own lives are in danger.

An incident out of California shows just that, and the officer had every right to fire on this suspect as soon as he saw the gun.

The footage, released Monday, shows an officer approaching Daniel Ahlschlager, 30, of New York, inside a Modesto Walgreens on Oct. 21.

Police Chief Galen Carroll said in a video statement that Ahlschlager was a passenger in a speeding car that just pulled into the pharmacy, where he hopped out and went inside as the driver parked the vehicle.

Inside the store, officer Justin Canatsy, who was assigned to a gang unit, asked Ahlschlager if he was armed, prompting him to say “Hell no” before indicating he badly needed to use a bathroom while walking away, video shows.

What happened next was a crazy run through the store, with Ahlschlager at one point falling. During that fall, a revolver can clearly be seen in his hand, yet Canatsy did not shoot.

The chase went on for some time, and then Canatsy can be seen using the large mirrors at the back of the store as a way to track Ahlschlager’s position. That was a smart move, and a much safer choice for Canatsy.

In the end, another officer joins the chase and fires a shot, striking Ahlschlager. He received treatment for his injury and is currently in jail on multiple charges, including being a felon in possession of a firearm.

Give the video below a watch and see how things transpired.