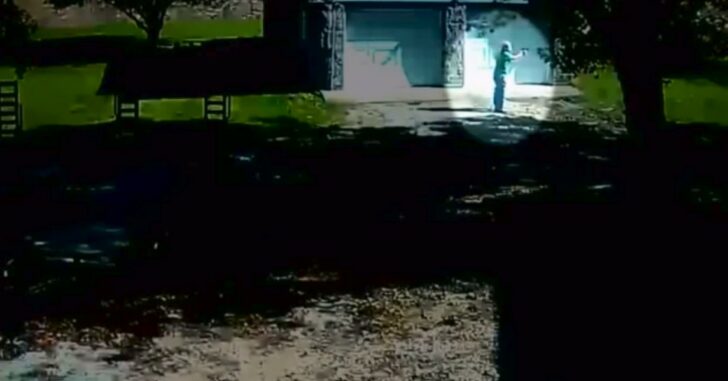 SHELBYVILLE, INDIANA — An armed grandfather took matters into his own hands when he saw two men on his property, and then making their way to a building that his grandson was in.

He wasn’t waiting for police to arrive to take action.

Robert Elliot tells WXIN he saw two masked men in a truck lurking around his home.

Surveillance video shows one of them using an ax to break down the door of a barn. A second suspect later appears.

Elliot says when he saw the robbers getting close to another home where his grandson was staying, he grabbed his gun and opened fire.

Neither of the two men were injured when being shot at, however they were both taken into custody. Police are also looking for a third suspect.

It goes to show that sometimes, matters need to be taken into the armed citizens’ hands, and waiting for police to arrive is sometimes no longer an option.

When two men, armed with an ax, are closing in on an occupied structure, that’s enough reason for the use of deadly force in most states.

The grandfather also reveals during an interview, seen below, that he was simply planning to watch the men until police arrived, but that they began to shoot at him once they spotted him with the gun. That’s when he fired back and sent them fleeing.

The pair were arrested and charged with burglary.

Previous article: Clerk, Backed Into Corner, Gets The Upper Hand After Drawing Firearm On Armed Suspect Next article: Neighbor Fatally Shoots Suspect After Seeing Man Being Beaten And Robbed