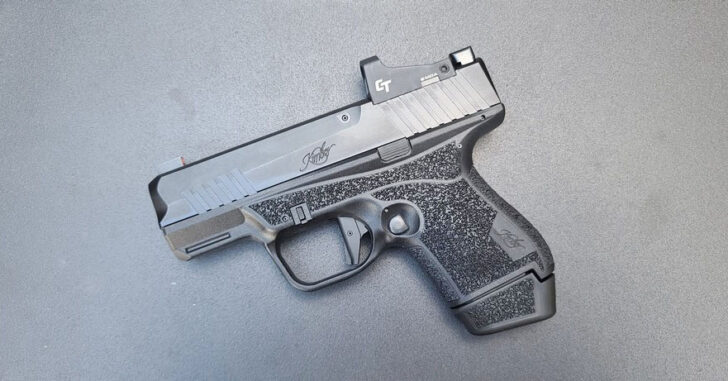 Mid-2021 is when our friends at Kimber announced the new Kimber R7 Mako, a 9mm striker-fired handgun in the compact category. Since then, I’ve spent a lot of time with mine both at the range and carrying. I opted for the optics version, because I’m a dot guy now.

Before we get started, here are the specs on the R7 Mako:

The R7 Mako ships with two magazines; (1) 11-round+1 and (1) 13-round+1. The 11-rounder is a flush magazine while the 13-rounder is extended, offering a unique curve at the back. You can clearly see the difference between the two in the photo below.

I like to have more rounds, and a longer grip, so I’ve always opted for the 13-rounder over the other. I’m not saying it’s bad, I just like the extra space so that my pinky isn’t left out.

One of my favorite features of the R7 Mako is the grip texturing. This has always been a big deal for me personally, as I have sweaty hands and live in a warm climate. Think Glock Gen 3 on a hot and sweaty day, and my hands are sliding around all day long, continuously needing to fix my grip after each shot.

The grip on the R7 Mako is deep and aggressive enough to allow for a solid purchase, but not too rough where you’re going to be abusing your palms while shooting. It’s a pretty-close-to-perfect grip in my mind.

The trigger is their Performance Carry Trigger™, with a nice smooth pull-back and on-time break. The cut of the trigger safety at the bottom is angled upwards, and is noticeable and pronounced when finding the perfect spot for your trigger finger. I’m not sure if that’s why they did it, but that’s my takeaway and it’s appreciated.

The sights consist of TruGlo® Tritium Pro Night Sights w/ orange front ring and white rear dots. If you have the optics version, of course, you have the addition of a Crimson Trace® CTS-1500.

The form factor of the R7 Mako is one to be desired, having curves in all the right places. The trigger guard is undercut, which should be a standard for all handguns IMO. When handling the R7 Mako, it never feels uncomfortable for me and I always have a good grip. Things just fall into place.

To really point things out, here is a numbered photo to easily show some of the features of the new R7 Mako:

It’s amazing when products come out like this because I feel like it’s all been done before. There are certain things, however, that should never be overlooked when choosing a handgun for concealed carry. Is it reliable? Is it comfortable? Can I shoot it accurately? Do I actually like it? Is the trigger smooth? Does it have the capacity I want? Is it going to work for me?

For me, the answer to all of those questions is yes, and that’s rare indeed. The Kimber R7 Mako is absolutely recommended by this writer, as they’ve hit a homerun with their first-ever striker fired polymer handgun.

Previous article: Graphic Warning: Horrible Attack On Elderly Woman Brings Us To The Same Topic Of Awareness And Preparedness Next article: Concealed Carrier Shoots Man On Bail For Felony After He And His 11-Year-Old Daughter Took Gunfire In Their Vehicle