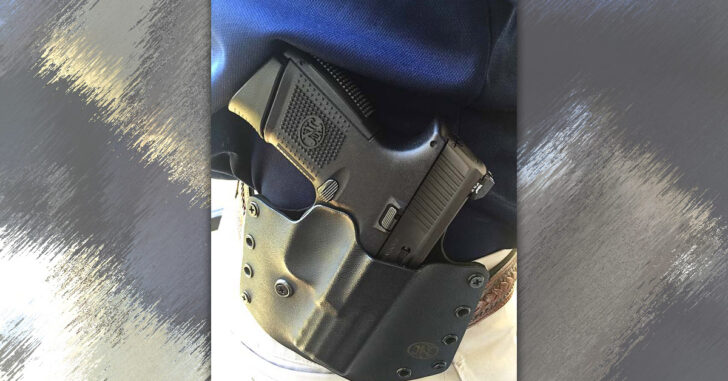 Choice is a good thing – except when it isn’t. Ever seen someone standing stock still in front of the spaghetti sauce section of their local supermarket? Like that. You can also find analysis paralysis at your local gun store, where blank-faced first-time customers confront hundreds of choices. Salesmen [sometimes] try to guide consumers through this farrago of firearms. More often it’s a “helpful” friend touting personal preference as received gospel. Never mind. Here are three steps for first-time handgun buyers to help them buy the right gun . . .

Begin by deciding the handgun’s purpose: fun and skill building at the gun range, home defense, carry (open or concealed) or a combination?

A good range gun is a usually a large firearm; bigger guns tend to have less recoil, greater accuracy and better comfort. A large gun is also good for home defense; a comfortable, accurate, high-capacity firearm is a handy thing to have when things get dangerously gnarly. A good carry gun, well, that’s a matter of debate and personal preference. Most – but not all – buyers prefer a relatively small gun.

The important point to remember: there is no one handgun to rule them all. Sure, you can buy a handgun for the gun range, home defense and carry (e.g., the GLOCK 19). And yes, there’s something to the old adage “beware of the man with one gun.” (Being really good with one gun is better than being OK with a range of firearms.) But generally speaking, a do-it-all gun involves unnecessary compromise.

Think shoes. Would you buy one pair of shoes for a night on the town, the gym and casual wear? The handgun market is just as competitive and diverse as the footwear market; handguns are highly-evolved machines designed to satisfy specific niches. Choose your niche. Choose your gun.

Bottom line: your first handgun should be task-specific. Once you master that firearm you can buy other handguns for other tasks – increasing your chances of success within each firearm’s assigned role. Buy a handgun that’s uncomfortable to shoot or wear or difficult to fire accurately and you won’t use it. You won’t practice, reducing your chances of deploying it effectively. You don’t want to do that.

Revolver or semi-automatic pistol? There are a mind-numbing range of considerations surrounding this seemingly simple choice: firearm size, cartridge capacity (number of bullets the gun holds), reliability, your desire and ability to reload under stress, grip strength and more. How can a newbie choose between a revolver and a semi when they have no hands-on experience with the two types of pistols?

They can’t. They shouldn’t. Don’t.

You wouldn’t buy a car without learning how to drive. Well, you might. But if you go into the car buying process with driving experience under your [seat] belt you’ll make a much better choice of automobile. The more cars you drive and use, the better your final choice. The same applies to firearms. The more guns you fire, the better you’re able to tell which one – or ones – are right for you.

It’s one thing to buy a revolver because someone tells you it’s simpler to operate (which it is, unless you’re under stress). It’s another to choose a revolver having fired and reloaded both revolvers and semi-automatics.

And then there’s recoil (the gun’s backwards movement caused by the momentum of the bullet leaving the barrel). Recoil can reduce accuracy and kill the fun factor. It’s impossible to know how much recoil is enough and how much is too much without experiencing the differences between pistols at the range.

And then there’s caliber (bullet size). You can buy a lower-caliber firearm to avoid recoil-induced inaccuracy. Or purchase a bigger gun in a higher caliber to achieve the same result. Proper grip and stance – enabled by training and practice – can “tame” recoil.

“Stopping power”? Triggers? Ergonomics? Controls? Ease of slide racking? External safety or no external safety? Don’t get me started. Don’t you get started on the buying process without shooting handguns.

Find a range that rents guns and rent a gun. And then another. And another. Different sizes, types and calibers. After you’re finished, forget it. Even if you take notes (allowed) chances are you won’t be able to remember what worked and what didn’t. Go back another time and do it again. I recommend three sessions before putting your money down, but two is the minimum.

Step 3. Don’t get married to your first gun

When I bought a fish tank, the fish guy told me to think of the first fish in the tank as Marines. “They might survive. They might not. But they will secure the tank.”

It’s entirely possible perhaps even likely that a first-time handgun buyer will buy the wrong gun. A firearm that’s a PITA to carry. A gun that hurts to shoot. As your shooting skills and tastes develop, you might quickly “outgrow” your gun. You might take a training course and discover your gun don’t git ‘er done. Age takes it toll on grip strength. Whatever. If it’s not workiong for you, ditch the gat.

Pistols don’t shed value like most consumer durables; you won’t take a large financial hit if you sell your gun. Check the current price for your used firearm at gunbroker.com (remembering that it’s theasking price). Sell your gun, trade it or pass it along to a friend (i.e. sell it to them for $1). Find something better.

The key takeaway: if you don’t like your first handgun it’s probably not you. You bought the wrong gun. Deal with it.

At some point, you will find the handgun (or handguns). You’ll shoot it with confidence and own it with pride. At that point, do me favor: don’t tell a new shooter that you own the perfect gun. (Don’t be that guy or gal.) Refer them to this article so that they can begin their journey to their ideal handgun.