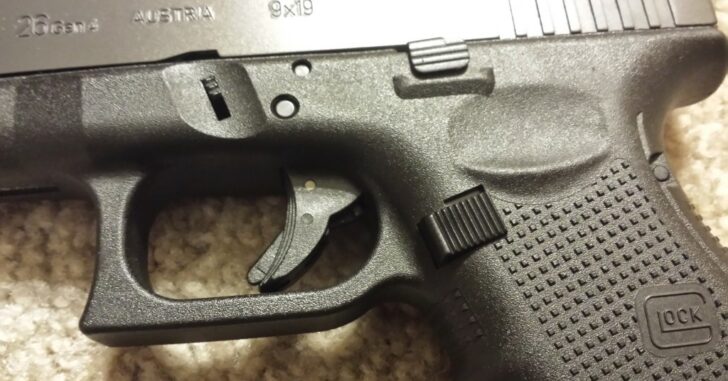 I’ll be the first to admit, I’m far from perfect. My wife would tell you otherwise as she tells me I have a complex where I think I’m always right. Where does that come from? It comes from my insane character trait of wanting to know everything about a subject I care about. Buying a new car? I know most of the nitty gritty details about how much horsepower and torque the new X model has or the new Y model will have. Why? I don’t know. I just care about it so I absorb it.

So why then, if I look for so much information on topics I care about have I been going about firearm training and carrying practices incorrectly for all these years? I’ll admit it. I train wrong and I’ve been carrying wrong. It felt comfortable so I stuck with it and I didn’t want to get outside of my comfort zone, so I never changed.

So, what have I been doing wrong? Well, for starters, when I carry any of my striker fired firearms I haven’t been carrying with a round in the chamber. If I’m carrying a single action, I do carry it cocked and locked. That just felt ten times safer to me in every way. There was zero chance of accidental fire with that method and it made me feel safer. So now I find myself reaching for the striker fired models more and more and yet I still find myself carrying what is the equivalent of a paper weight. The old adage of “nothing more useless than an unloaded firearm” keep coming up in the back of my mind. I can draw, rack the slide and get on target very quickly I kept saying to myself.

Until I actually tried it.

I’m sure if you’re a fan of concealed carry you’ve more than likely seen a few videos showing exactly why you want to carry with a round in the chamber. In my mind I hope and pray I never need to draw a firearm to protect my life or my loved ones lives, but I’ve always imagined I’d have plenty of time to draw, rack the slide and get on target. As I’m now coming to realize, most incidents are over in the time it would take to do the above sequence. These incidents happen so quickly that if you count on having a few extra seconds to prepare, you’re just fooling yourself. Demonstrations of attackers charging and being able to close a 50 foot distance in a matter of a second or two at full sprint are what got me to stop fooling myself. Also, if you have seen the video of the Pharmacist protecting his customers and his store against an armed suspect you’ll quickly learn that if the pharmacist counted on a 2 second window to draw, rack and get on target, more than likely the video wouldn’t have ended well.

So I’ll raise my hand, I’ll swallow my pride and admit wrongdoing. Don’t be like me. There are some very good articles on the Concealed Nation website outlining exactly how to go about beginning to carry with a round in the chamber. If you’ve been hesitant to try this, I suggest you skim through the articles and give it a read. It’s very eye opening.

Carrying with a round in the chamber is only my first mistake. I’ll bet there’s a lot of us making my second mistake. When you go to the range to practice with your carry rig (you are practicing, right?) do you fire at targets from 1 to 10 feet away or do you fire are targets 25 to 50 feet away? Studies show that if you need to use your firearm to protect your life, more than likely it will be at night, it will be from a distance of 0 to 10 feet and it will be over VERY quickly.

I’m extremely guilty of firing at 25 to 50 feet, so again I’ll raise my hand. I’ve been bad. I promise I’ll stop trying to hit bullseyes at 50 feet and concentrate more on placing 3 shots in a fist sized pattern at 1 to 10 feet. Being an over analyst, I’m the first to look at the accuracy of firearm tests in all the magazines. When I see a 3 inch group at 25 yards from a $3500 1911 I scoff a bit say it should be at least half that size for that much money. Brutally honest assessment? It would/could save your life with that accuracy, no argument. That doesn’t mean you should carry a $3500 1911. In fact, if I ever purchased a $3500 1911 two things would happen. 1) You’d see all of my possessions strewn about my lawn and 2) it would never leave the safe in fear of holster wear if I ever carried it. But that’s a story for another time.

In short, don’t try to fool yourself into thinking that carrying with an unloaded chamber is safer. Would you carry a dull knife for the same reason, or only fill your fire extinguisher half full in fear it could explode? No. It just takes practice, like anything else. And confidence. Negligent discharges DO happen, but they can be prevented. If you carry a Glock and are afraid of negligent discharge, there are products out there that immobilize the trigger and can be pushed out of the trigger guard in a fraction of a second. Some love it, some hate it. It’s up to you to determine what’s right for you. ALWAYS holster a concealed carry firearm and choose a holster that covers the trigger to help prevent negligent discharge.

Also, don’t get hung up on 25 yard accuracy and don’t be afraid to practice at what will first seem to be ridiculous ranges. People at the firing range are going to look at you funny at first. They’ll get over it. If they’re a serious shooter and concealed carry advocate, they’ll know exactly what you’re doing and why you’re doing it. Some ranges will not allow you to holster a loaded firearm and practice drawing, so be sure to check the rules first. You may need to practice drawing at home, unloaded, but don’t assume the accuracy is automatically there at 10 feet and under because the distance is so short. Practice, practice, practice.

In closing, I’ll go find a blackboard and start writing “I will not carry unloaded and I’ll start practicing at 10 feet and under” 100 times until I’ve learned my lesson. Born and raised Iowan. NRA Lifetime Member and firearm enthusiast since 6th grade. Aaron’s interest in responsible carry issues has increased over the years, and is a large supporter of the 2nd amendment. Aaron is also a big 10mm Auto enthusiast and owns a Glock 29 Gen 4. One of his lifelong goals is to begin long distance target shooting out to and including 1000 yards. Aaron has a wife of 10 years, 3 kids and is an IT Consultant who specializes in Enterprise Content Management Solutions and process automation.

View all posts by Aaron McVay