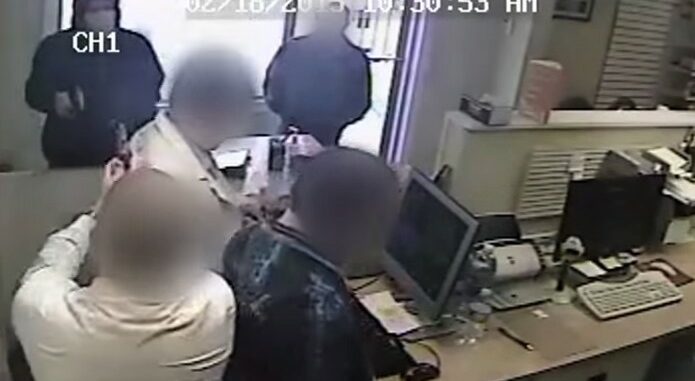 A robber in WV got more than he bargained for when he entered a pharmacy that happened to have an armed pharmacist who refuses to be a victim.

A few days ago, news broke of the pharmacist who was carrying his firearm at work — and used it to defend himself and others against an armed thug.

Now, video has been released that shows the tense moments of self-defense. In a matter of seconds, numerous lives change.

Good Family Pharmacy employee Chris Monk said pharmacist Don Radcliff first attempted to “feel the guy out.” Monk said Radcliff pointed at the man, who was wearing a bandanna over his face, and was “just kind of joking with him,” saying “Are you here to rob me?”

The suspect pulled out a gun in response.

Radcliff, who had already started reaching for the gun under his white pharmacy coat, just in case, opened fire.

The whole incident happened within a matter of seconds.

Radcliff and a pharmacy intern tried to render aid, but the suspect later died of his wounds.

As Radcliff tried to stop the bleeding from the suspect’s chest, he said ,“Why did you make me do this?” and “I didn’t mean to do this,” according to employees who were there.

At the end of the day, Radcliff was able to go home to his family after successfully defending himself. That’s the reason why most of us carry; to protect ourselves and others against the evil that exists.

Previous article: [VIDEO] Son Buys Widowed Mother A Gun For Protection, It Ends Up Saving Her Life Just A Week Later After A Home Invasion Next article: [FIREARM REVIEW] Revolvers for Concealed Carry: The S&W Airweight