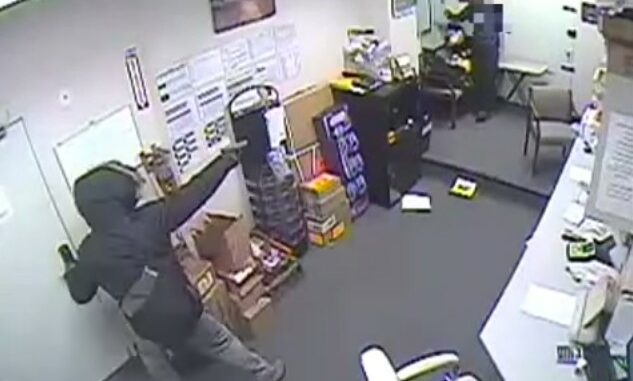 The video above shows an armed robber taking control of a pharmacy employee and robbing a safe. We are going to use this video as an educational tool to see when, if ever, you would have seen the opportunity to draw your firearm.

Assuming that you were caught off guard like this man and forced into the room by the armed robber, at what point after that would you have made a move? I would have been content at the 0:25 mark, and numerous points after that.

Greenwich Village, NY – A violent daytime robbery caught on video Monday shows a suspect beat a drugstore manager, force him at gunpoint to open the store safe then take off with more than $9,000 cash, police video shows.

The video shows the robber enter the CVS Pharmacy at 360 Avenue of the Americas at 3:15 p.m. wearing a black parka with a fur-lined hood, gray pants and brown boots.

The man, who had a messenger bag, is seen on the recording forcing his way into the back office, immediately pushes the manager to the floor then tries to drag him to the safe.

The 21-year-old manager struggles free for a moment, but the robber forces the employee at gunpoint over to the safe and demands him to open it.

The gunman shovels the loot into his messenger bag then backs out the door with the gun trained on the victim, according to the tape.

A manager of the CVS was not injured and he declined to comment.

The first problem of course, is that this took place in Manhattan. It’s essentially a gun free zone, unless you’re a criminal.