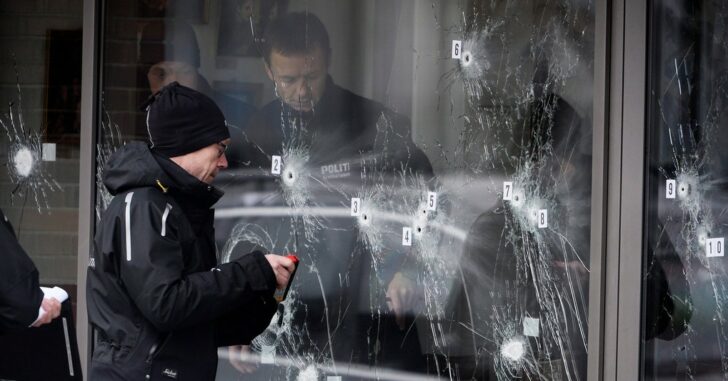 Over the weekend, terror struck in Copenhagen, Denmark as a gunman left two civilians dead and five police officers wounded in two separate attacks. News reports indicate that the first attack took place at the Krudttonden Café Saturday afternoon. Danish film director Finn Norgaard was killed. A free-speech event was taking place in the café at the time, featuring Mr. Lars Vilks, a Danish cartoonist critical of Islam. Mr. Vilks had angered Muslims in 2007 when he published a cartoon depicting the Prophet Muhammad as a dog. Mr. Vilks was speaking at the event during the attack, but was unharmed.

At approximately 1:00 am on Sunday local time, an second attack took place at a downtown synagogue, where 37 year old Dan Uzan was standing guard outside a Bat Mitzvah. Mr. Uzan was killed. After the attack, the gunman was cornered and killed by police. Subsequent investigation and examination of surveillance camera footage confirmed that both attacks were carried out by the same person, 22 year old Omar Abdel Hamid El-Hussein, who was born and raised in Denmark. El-Hussein was known to police and had a record of violence, gang activity, and weapons offenses. He had recently been released from prison. It is reported that El-Hussein shouted “Allahu akbar” before firing at the cafe where Mr. Norgaard was killed. A subsequent search of his apartment uncovered an automatic weapon.

Mr. Vilks later commented that he believed the attack had been inspired by the attack on the office of the magazine Charlie Hebdo by Islamic terrorists in Paris earlier this year. Danish Intelligence reported that Mr. El-Hussein had traveled to Iraq and Syria.

It is interesting to note that Denmark has restrictive gun laws, as reported by gunpolicy.org. Danish law recognizes no right for citizens to possess firearms. Possession of fully automatic weapons is prohibited. Semi-automatic firearms and handguns may be owned only with “special authorization.” In Denmark, all guns must be registered, and all sales of firearms and ammunition are recorded.

Clearly, all these restrictive laws could not prevent this terrorist from murdering two civilians and wounding a number of police officers before being killed by police. Not withstanding their laws, the citizens of Copenhagen live in fear as Islamic terrorists behead Christians in Lybia, slaughter Jews in Paris, and continue to gain strength in Iraq and Syria. Terrorists do not care about laws. Stay safe.